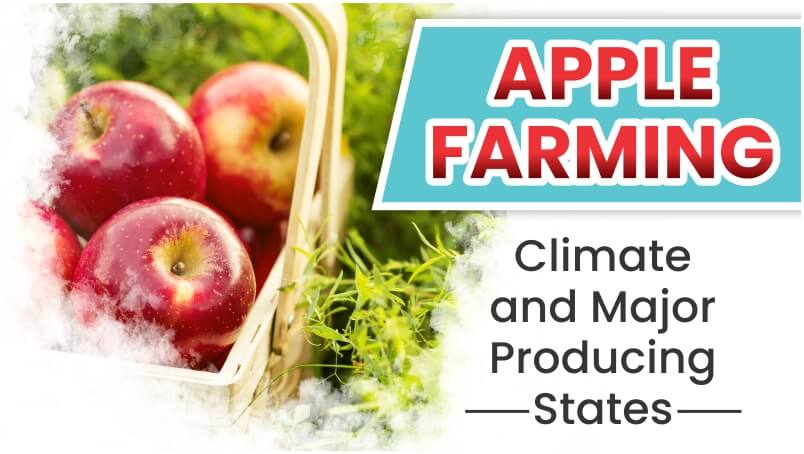 Apple farming is not only for those with huge areas of property. One may do a healthy harvest of apple farming even in a small area by planting a garden of smaller apple trees. In the central and northern regions, Apple farming in the spring is advised. Only in regions with typically milder and moister autumn and winter weather apple may fall planting be successful.

The genetic background of apple seeds varies from that of the parent tree, so characteristics like tree growth, toughness, and fruit quality will vary (and will usually be poorer). So users won’t get desired apple fruits if they plant a Golden delicious seed. They might have to wait a while because it can take an apple seedling 8 to 10 years to get big enough to start producing apples.

Apple cultivated varieties number more than 7,500. Even when grown on the same rootstock, varieties differ in their output and the final size of the tree. There are various varieties for subtropical and temperate areas. A significant temperate fruit is an apple. The majority of apples are eaten raw, but a tiny portion of the crop is processed into juices, jellies, canned slices, and other products. Apple is mostly grown in Jammu and Kashmir, Himachal Pradesh, the hills of Uttar Pradesh, and Uttaranchal in India. Additionally, it is marginally grown in Arunachal Pradesh, Nagaland, Punjab, and Sikkim.

The apple is a crop grown in temperate regions. The apple-growing regions of India, however, do not fall inside the temperate zone; rather, the Himalayan mountain ranges and the area’s high elevation are to blame for the region’s predominant temperate temperature. During the actively growing stage, the summertime average temperature should be between 21 and 24 degrees Celcius. Apple thrives in areas where trees have continuous wintertime rest and plenty of sunshine for optimal color development. It can be grown between 1500 and 2700 meters above sea level. The best conditions for apple tree growth and fruitfulness are well-distributed rainfall of 1000–1250 mm throughout the growing season.

The majority of commercial apple tree varieties do well in climates that are cold and rainy, with chilly winter and cool spring and summer. It is essential to have lots of sunlight because it has a big impact on the fruit’s color. The apple tree, in general, requires more cold than the majority of other deciduous fruit trees. In areas where temperatures rarely rise beyond 90°F, the most common apple tree kinds flourish. When the temperature rises too high, many apple farmers also utilize large fans to cool the apple orchard.

Old farmers believed that the apple tree could only provide good crops when grown above 1600 feet (487 meters) and only if the tree had annually undergone several hundred hours of cold. For the types that were popular at the time, this was only partially true. Today, however, producers have been able to develop apple trees for commercial purposes because of the resilience and adaptability of apple trees generally as well as meticulous variety creation and selection.

Apple trees frequently generate low yields, particularly when grown in tropical areas, although this is not due to the weather or lack of cold. The crucial stage of pollination is frequently deteriorated by the frequent rainfalls. However, commercial apple tree cultivation in tropical climes is challenging. It calls for rigorous testing (choosing and growing at least 10 different kinds annually) as well as ongoing improvement of pollination, watering, fertilizing, and harvesting techniques.

2. The normal apple tree can start producing a sizable amount of fruit between its third and sixth years of life and can keep doing so until between its 35th and 50th years. The following are some factors to think about: The location of the orchard must be carefully chosen in accordance with the temperature, soil needs, and, of course, the market. The next step is to choose between standard, semi-dwarf, and dwarf trees. Most industrial apple farmers select semi-dwarf cultivators.

3. For long-term healthy yields, planting distances, pollination, fertilizer, watering, trimming, and thinning are crucial. Finally, in order to harvest your apples at the proper time, you must be able to hire a small team of skilled laborers. This can also be a concern because the apple tree often only provides us with a 10-day window of opportunity. The quality of your apples could significantly decline if you can’t harvest them now.

The home of apple production is known to be Jammu & Kashmir. It contributes 77.71 percent of the apple production in India. There are other names on the list as well, but these apples have a special appeal. Jammu produces 1808.33 tonnes of apples annually on average.

Himachal Pradesh consistently contributes 19.19% of the nation’s apple production. In India, popular cultivars like Anna, Maayan, Mollies, Michal, Rich-e-Red, Gala, Firdous, and others are developed. In 2018, the state produced 446.57 tonnes of apples overall.

Another state that produces a lot of apples is Uttarakhand. India produces 2.52 percent of the world’s apple crop. According to a recent source, the planting of apple saplings will shortly start. More apple production projects have been made public by the government in the Dehradun region. The state produced 58.66 tonnes of apples last year.

Arunachal Pradesh ranks well among the top states in India for apple production, contributing 0.32 percent of the country’s total output. With a production of 7.35 tonnes of apples for the years 2017–2018, many studies have ranked AP as third among states that produce a significant amount of apples.

For the majority of Nagaland’s tribal people, growing apples is their primary source of income. Their survival is largely reliant on the marketing and production of apples in this area. The share is 0.09 percent of the average global production of 1.99 tonnes.

Reasons to Buy Eicher Tractors in 2021