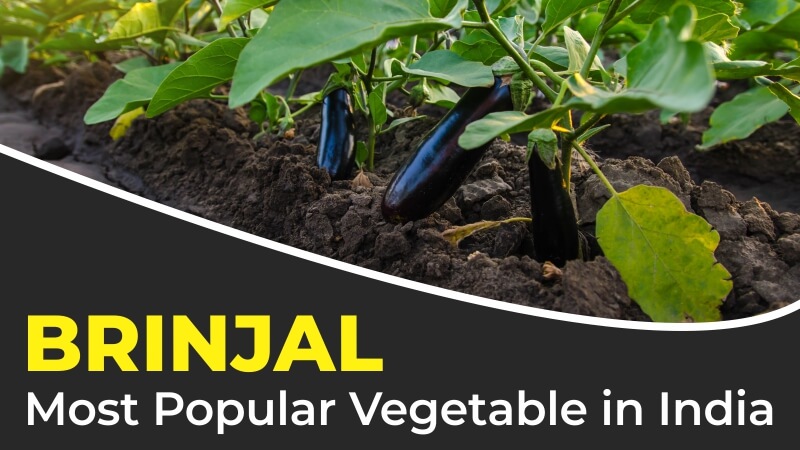 “Baigan” another name for brinjal, has gained popularity in both vegetarian and non-vegetarian cuisines. The brinjal was given the nickname “King of Vegetables” because of its magnificently glossy, rich, and purple exterior as well as its meaty, highly nutritious white flesh. This vegetable is edible, all over the world. Since brinjal is a member of the nightshade family, both the fruit and the blossom can be consumed. Because it grows best in warm climates, brinjal needs a warm growing season. It is extremely vulnerable to freezing. When the temperature drops down below 17 degrees Celsius, it has a significant impact on the crop’s growth. It can be grown successfully at an elevation of 1200m above sea level and throughout the summer and wet seasons.

The most popular tropical vegetable growing in India is brinjal.

Some of the names of brinjal in popular states are: Begun (Bengali), Ringna (Gujarathi), Baingan (Hindi), Badane (Kannada), Waangum (Kashmiri), Vange (Marathi), Baigan (Oriya), Vashuthana (Malayalam), Kathiri (Tamil), Venkaya (Telugu), and Peethabhala (Sanskrit) are only a few of the many names for it.

Indian vegetable varieties come in a wide variety of sizes, shapes, and colors. In curries, immature or fully grown vegetables are used, and brinjal is a common ingredient. The nutritional content of fruits varies from variety to variety and they are one of the most popular sources of vitamins and minerals like calcium and phosphorus.

Brinjal, or eggplant, has its origins in India. Since it has been grown in India for over 4,000 years, brinjal has been mentioned throughout history and in many different languages. It is one of the most favored vegetables in India and is grown all around the nation all year long.

More resilient than other vegetables, brinjal is a crop. It may be cultivated successfully in dry areas with little irrigation because of its hardiness. Mineral and vitamin content is average. It can continue to develop all year long. After China, India is the second-largest producer of brinjal. West Bengal, Orissa, Karnataka, Bihar, Maharashtra, Uttar Pradesh, and Andhra Pradesh are the principal states in India where brinjal is grown.

For sustainable production and climate change adaptation, farmers need better eggplant varieties. Due to its unusually long growing phase, eggplant is more vulnerable to a variety of plant diseases, pests, nematodes, and weeds than other vegetable crops.

Brinjal may be cultivated on a variety of soil types because it is a resilient crop. As a long-lasting crop, it needs fertile, well-drained sandy loam soil, which is ideal for its cultivation and produces a good yield. Early crop light soil is ideal, and silt loam and clay loam with high yields are both good choices. The pH of the soil should range from 5.5 to 6.6 for healthy growth.

Nursery beds that are 3 meters long, 1 meter wide, and 15 cm high are used to sow brinjal seeds. The nursery bed is then mixed with well-rotted farmyard manure. Then, two days prior to planting, the nursery bed is soaked in Captan solution to ward off the attack of the damping off disease in the brinjal nursery. The nursery is then covered with compost or dry leaves after the seeds are sowed in rows 5 cm apart. Irrigation is done lightly. Until the seed germinates, the nursery beds should be covered with black polythene sheets or paddy straw. Healthy seedlings with three to four leaves and a height of 12 to 15 cm are prepared for transplantation. Light irrigation is applied after planting and transplanting is done in the evening.

When the nursery is ready for the first crop in November, the seedlings are ready for transplantation in October.

Prepare the nursery for the second harvest in November, then transplant the crop in the first two weeks of February.

Plant the nursery for the third crop in February or March, and transplant it before the end of April.

Nursery sowing in July and transplanting in August constitute the fourth crop.

Brinjal is a crop that feeds heavily. Thus, a balanced application of manure and fertilizers is crucial for the successful development of crops. Additionally, being a crop with a lengthy growing season, brinjal needs a lot of manure and fertilizer. When preparing the field, 200-250 q/ha of well-rotted farmyard manure or compost should be added. 100-120 kg of nitrogen should be added to the crop, and 50–60 kg each of phosphate and potash is also needed because hybrid crops need extra fertilizer. Before transplanting, a full dose of phosphorus, potash, and half of the nitrogen is applied to the field. The remaining N, in the form of urea, is then applied in two to three splits after 30, 45, and 60 days.

The variety (size, spread, and bearing time) and soil fertility often influence the spacing. Use a plant-to-plant distance of 35–40 cm and a row-to-row distance of 60 cm.

Plant seeds in a nursery at a depth of 1 cm, then cover with dirt.

Transplantation of seedlings into the main field is the sowing technique.

In the summer, after every third or fourth day, and after 12 to 15 days in the winter, water the field. For excellent yields of brinjal, prompt watering is crucial. Fields of brinjal should be periodically watered to keep the soil moist on chilly days. Avoid having standing water in your field since brinjal cannot stand water logging.

The first picking fruits are ripe between 120 and 130 days after the seeds are sown, depending on the type. As soon as the fruits reach a desirable size and color, they should be harvested. The fruits should be picked when they turn greenish yellow or brown and their meat becomes rough and dry. By pressing the thumb on the side of the fruit, one can determine the fruit’s maturity. Fruit is considered to be highly immature if it reverts to its original size and form. Some of the calyx and the stem end is left on the fruit after harvesting.

To Know more about brinjal farming and other crops, install the KhetiGuru application that provides you with all agricultural information and also gives you expert advice for farming-related problems. To get the tractor, tractor price related information visit the KhetiGaadi website.

How To Maintain PH Value of Soil

Buy Agriculture Tractor as Per Your Requirement