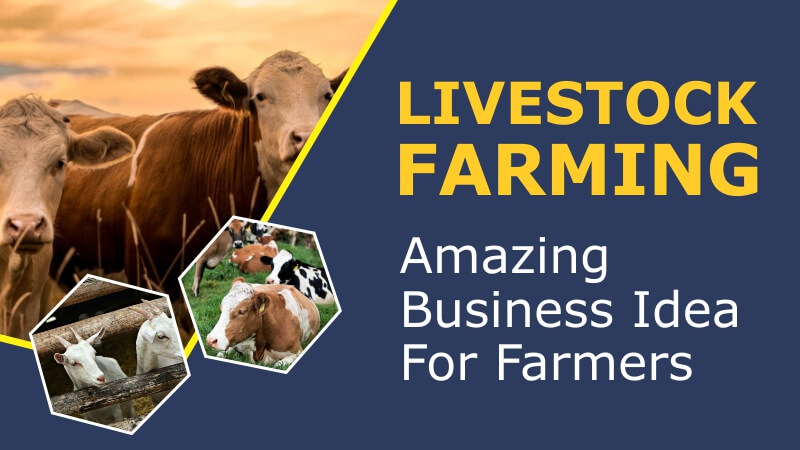 Globally, the livestock farming industry is very dynamic. It is changing in developing nations as a result of the quickly rising demand for animal products. While many production processes are becoming more efficient and environmentally sustainable, the market for cattle products is developing in wealthy nations. The demand for livestock farming products has historically changed as a result of changes in human population, income, and urbanization. The production response in various livestock farming has been correlated with advances in science and technology as well as increases in the number of animals.

Competition for natural resources, notably land and water, competition between food and feed, and the requirement to function in a carbon-constrained economy will all have an increasing impact on productivity in the future.

The potential for increased production, increased efficiency, and genetic advances will continue to be influenced by advancements in breeding, nutrition, and animal health. Regulations governing the environment, animal welfare, and carbon emissions are projected to have an increasing impact on livestock production. Future demand for livestock products may be significantly tempered by socioeconomic variables like concerns about human health and shifting sociocultural norms. Regarding how these forces will manifest themselves in various parts of the world during the ensuing decades, there is a great deal of unknown.

The economy of farmers is significantly influenced by livestock. The farmers in India practice mixed farming, which combines crops and livestock and maximizes resource efficiency by using one enterprise’s result as another’s input. Farmers benefit from their cattle in a variety of ways.

If your backyard is small, you can start farming there, or you can find a location to rent if your backyard is larger. The sole consideration you should make is choosing an animal that is in high demand on the market.

Amazing Livestock ideas are described below:

Everywhere in the world, dairy production is common. Dairy farming is a fantastic opportunity for farmers to increase their income and give their families access to more nutrient-dense food. Value-added goods like yogurt and cheese offer a better source of income while subsistence dairy farming provides fresh milk and a source of basic income.

One of the most valuable livestock agricultural businesses is goat farming. We get milk and meat from goats. A low-investment, high-profit animal farming venture is goat farming. Due to their smaller bodies than other livestock animals, they don’t require a large living area. Goat farming also guarantees a quick and substantial return on investment, depending on the quantity invested.

Asian nations including India, Bangladesh, the Philippines, Thailand, etc. are known for their love of mud crabs. These nations are the main mud crab producers. It should be emphasized that the product is in high demand on the global market. Additionally, mud crabs have tasty flesh. You can simply establish and operate a mud crab farming business with a very small initial cost.

For agricultural entrepreneurs with access to large bodies of water, fish farming is another profitable industry. Fish can also be raised in tanks, though. You can choose from a variety of carp fish species, as well as salmon, shrimp, catfish, and prawns. To understand the local demand before beginning a fish farming firm, it is crucial to conduct a market analysis. Fish aquaculture for decorative purposes is becoming more and more common today.

Pig farming is yet another profitable animal business concept. Worldwide, more than 1 billion pigs are killed each year. The United States, the European Union, and Canada are the top exporters of pigs. Pigs are primarily raised for human consumption, but their skin, fat, and other parts are also used in clothes, cosmetics, processed food, and medicine.

For livestock farmers, sheep farming is also a booming market. Sheep can be raised for their fibre, milk, and meat. However, you must select particular breeds based on the agro-climatic conditions in your area. Important sheep-producing nations include the Chinese mainland, Australia, India, Iran, and others. You must create a detailed business plan before establishing a sheep farming operation. This strategy should contain financial expenses and earnings.

Duck farming is last but not least. Around the world, a number of breeds of duck that produce both meat and eggs are available. Duck farming is a possibility if you want to start a low-cost livestock farming enterprise. Ducks can also be raised arid of water. Ducks don’t require special care or supervision because they are resilient birds.

One can start a chicken farm for both eggs and meat. Chickens that lay eggs are known as layers, whereas hens that produce meat are known as broilers. Poultry farming is a lucrative livestock industry for farmers because of the rising demand for chicken meat. Starting a chicken farm, whether in a small or large size, is simple.