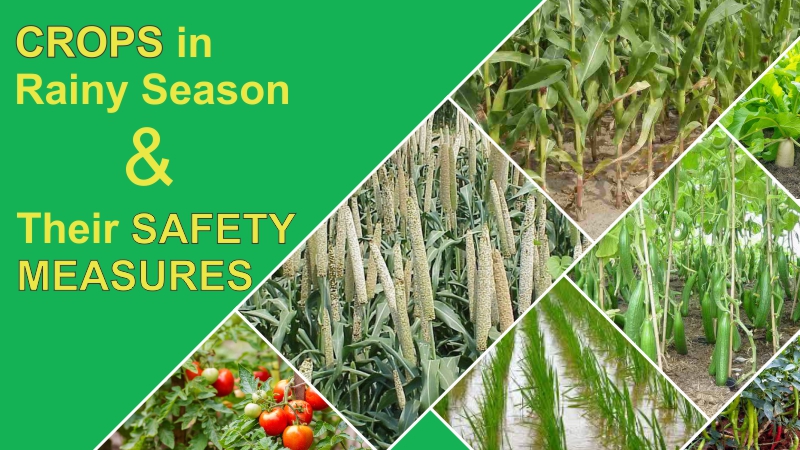 We all seem to be known that India’s root culture, agriculture, is one that is extremely important. For up to 70% of India’s population, agriculture is their primary line of work. Crop farming, animal husbandry, agro-forestry, and other activities are included. It’s interesting to note that India is regarded as the world’s top producer of a variety of crops and that it is classified into three categories according to the crops grown during each season: Rabi, Kharif, and Zaid crops.

Did you know that many crops flourish in wet environments and grow wonderfully during the rainy season? In this blog, we’ll concentrate on Kharif Crops, sometimes referred to as Monsoon Crops. Kharif crops are raised in humid and hot climates. Rice, maize, bajra, corn, and peas are just a few of the Kharif crops grown in India during the monsoon season. In the southern portion of India, when it is the rainy season in May, Kharif crops are planted. In the northern regions of India, Kharif varieties are cultivated in June. The pattern of rainfall has a significant impact on the growth of Kharif crops. As a result, it is crucial to take into account the timing and amount of rainwater that would be available to cultivate the Kharif crops with a fair yield.

During the rainy season, farming might become difficult. It’s critical to protect yourself from the risks that farming and other agricultural jobs could include, especially when there are slick routes and wet surfaces due to intense storms and rainfall.

India is one of the biggest producers of white and brown rice in the world. It supplies more than half of the Indian population and up to one-third of India’s total cultivated land. Although it is grown in most Indian states, West Bengal, Punjab, and Uttar Pradesh are the top three states for rice production. Since India produces the most rice, it is recommended to grow rice during the monsoon season. It needs an average temperature of 25 to 26 degrees Celsius and at least 100 centimeters of precipitation. Of all the cities, only Punjab and Haryana produce expensive rice for export.

India also referred to as “White Gold,” ranks third in the world for cotton production. Cotton, a tropical and subtropical crop is another Kharif crop. Cotton is regarded as a crop for making fiber. Oil from its seed is used in cooking. Long, medium and short-staple varieties of Kharif crops include cotton. Cotton needs between 21 and 30 degrees Celsius and at least 50 to 100 cm of rain each year to flourish. Gujarat, Maharashtra, Andhra Pradesh, Haryana, Rajasthan, Karnataka, Tamil Nadu, and Orissa are the states that produce the most cotton overall. Gujarat has the highest rating overall, according to the prior study. About 75% of the rainfall needed for cotton cultivation is delivered during the monsoon.

An ancient crop, sugarcane is grown in tropical and subtropical regions. Sugarcane is used to make over 79 percent of all sugar. Falernum, molasses, rum, ethanol, and other products generated from sugarcane are among the few others. Only during the monsoon season is sugarcane grown. It also needs agroclimatic zones with hot, humid weather. The regions for developing sugarcane are the North Western, North Central, North Eastern, Peninsular Zone, and coastal zones. The ideal temperature for stem cuttings is between 32 and 38 degrees Celsius, whereas 14 to 16 degrees Celsius are required for ripening.

India is indeed the country’s second producer of tea. Everyone is familiar with the well-known tea made in Assam and Darjeeling. Additionally, as of 2012, Assam considered tea to be the official beverage. India consumes almost 30% of the world’s tea production, making it the country with the highest consumption. In addition, we export that much tea from India despite the high consumption, which means there is a vast market for it. The nature of a tea plantation is quite dynamic, and it can withstand both heavy snowfall and frost. As a result, it may typically grow in a variety of conditions across the nation, from subtropical to tropical.

The main crop in Indian agriculture is pulses. Crops like green gram and black gram are India’s most significant and vital leading crops during the monsoon season. Crops need to be maintained and cared for specifically during each season. In order to increase productivity and ensure the healthy growth of pulse crops, organic fertilizers are crucial. The sowing of Kharif crops is slowed down by late monsoons, and production may be damaged and delayed as a result. India receives 70% of its rainfall from the monsoon, which is also essential to the country’s agriculture production and economy.

Suggestions For Ensuring The Safety Of Farm During The Rainy Season:

Similar to how wooden equipment can deteriorate when exposed to intense rain, equipment, especially that constructed of iron, is susceptible to rust. However, the most important precaution to take in order to prevent any explosions and electrical hazards is to fix and keep any electrical farm equipment away from rain and other liquids.

In some circumstances, equipment damage may not become evident right away after a downpour. If you use a machine or tool that has been harmed by water, you run the risk of getting hurt. Any equipment should be kept in a secure, dry location to avoid disasters.

Make sure to install a fence around any open water sources on the farm to prevent people from tripping over them during the wet season. During the rainy season, it would be difficult for you and your employees to locate lakes or wells, and muddy banks could result in someone slipping or, worst yet, drowning. You could preserve not just yourself but also small farm animals by erecting barriers around open water regions.

Keep your crops out of the rain, especially those that are ready for harvest, as letting them sit on soggy soil might have unfavorable impacts. Produce from the farm may have moisture that encourages microbial growth, which results in fungus and mould. The consumption of these tainted goods can be harmful to both human and animal health.

Electric outlets should be avoided at all costs since, particularly in a field, water and electricity can be fatal. Avoid electric fences, especially if it is pouring. To prevent mishaps, post warning signs in all locations that pose a risk from electricity. Keep your farm animals away from living wires at all times. It is essential to notify the authorities to handle the matter if any electrical poles ever collapse near your farm.

Parts of agriculture Tractor and its function

How you can use KhetiGaadi Shop