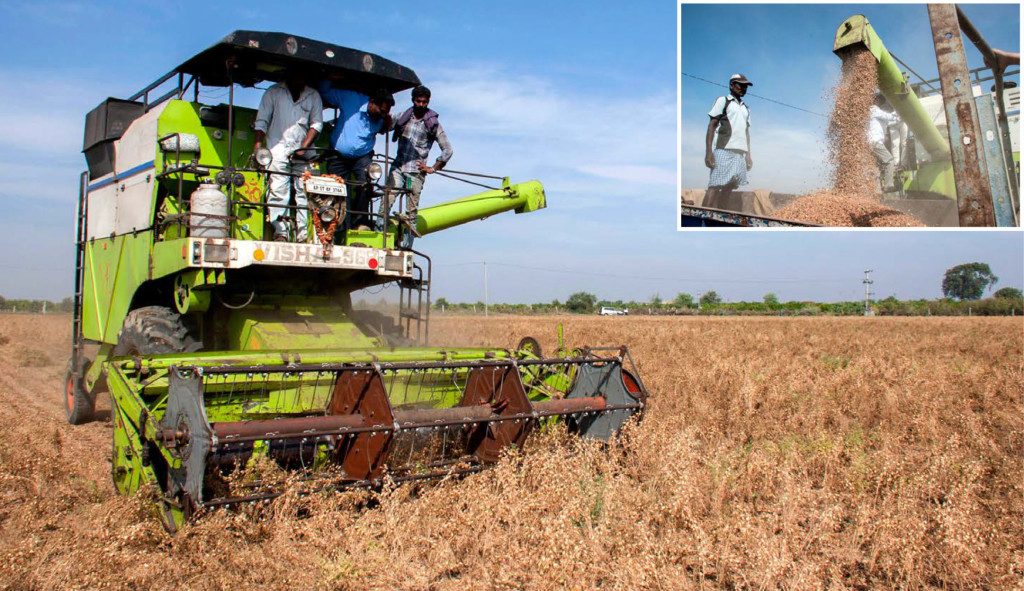 Farm Machinery and Equipment : One of the first mentions of a farming implement in Indian literature occurs in the Ramayana when the King of Janaka is described ploughing a field. Implements such as ploughs, weeders, spades,  sickles, harvesters, grain separators, and threshers have been used by indigenous farmers for centuries. Traditional Indian agriculture flourished by harnessing human and animal power with these mechanical tools.

The implements suited the exact requirements of the farmers and were locally produced, using locally sourced materials for the most part.  The farmers could adapt, alter, repair, or replace the implements as the need arose. They were inexpensive, readily available, and as ingeniuous as the talented Indian artisans could make them.

The British writers, Dr. John Augustus Voelcker and J. Mollison, who researched the Indian agricultural scenario in the latter half of the 19th century, had high praise for these traditional farm implements. Neither of them thought that the British, at the time, had anything to improve on them. The Indian farm implements were perfect for Indian farming conditions.

Many of these farm implements are still in use, albeit with modifications in designs and materials, and, increasingly, they are being supplemented with modern farm machinery.

There are many available machines , Farm Machinery and Equipment  on Khetigaadi. Be sure to browse through the website and check them out.

As per the twelfth five-year plan (2012-2017), the Indian government is committed to promoting farm mechanization to increase agricultural output. This involves revitalizing the agricultural sector by modernizing farm machinery, supporting innovation in farm technology, and offering incentives in the forms of subsidies to agriculture machinery manufacturers and buyers. The use of more efficient farm implements will cut down labor and time costs, improve productivity per hectare, and reduce the losses incurred in the post-harvest phase.

Increased farm mechanization is expected to resolve some of the looming challenges faced by the Indian agricultural sector, such as labor shortage due to the migration of farm workers to urban areas to work in other developing sectors and inconsistent productivity of cultivable lands due to an over-reliance on the undependable monsoon rains. Farm machinery like tractors, tillers, diggers, reapers, harvesters, and threshers can cut down on labor requirement, and advanced irrigation techniques can resolve crop irrigation concerns.

Another positive outcome of farm mechanization will be a reduction in the number of accidents and injuries caused by handheld farm implements; these can often turn out to be extremely costly in life and economic terms, incapacitating workers and holding up farm work.

Level of Mechanization in the Indian States

Compared to countries such as the United States, Canada, France, Japan, and China, India lags behind considerably in the widespread use of modern farm implements and machinery. Farms in the flatlands of Punjab, Haryana, Uttar Pradesh, and Maharashtra have the highest levels of mechanization in the country, while farms in the hilly terrains of the North Eastern States have the lowest. This has a lot to do with topography, farm sizes, the extent of government subsidies and financing, availability of transport and transportable roads, and information access to modern farming practices and technologies.

To encourage farm mechanization at all levels in all Indian regions, the government has sponsored schemes like Rashtriya Krishi Vikas Yojana (RKVY), the National Mission on Agricultural Extension and Technology (NMAET), the Sub-Mission on Agricultural Mechanisation (SMAM, part of NMAET), and the Mission for Integrated Development of Horticulture (MIDH).

The positive outcome of these schemes can be seen in the development of new women-centric agricultural implements by the Indian Council of Agricultural Research (ICAR) and advanced agricultural machinery like groundnut diggers and sugarcane planters by Indian innovators. Introduction of solar-powered water systems in rural areas to bypass the uncertain power supply has also resulted through government sponsorship.

The government has also been promoting custom hiring centers where farmers can hire the implements and machinery they need. It is more economically viable for Indian farmers to hire equipment for the limited duration of the planting and harvest seasons than to have to bear the expense of buying, maintaining, and storing the machinery. Forming cooperatives to hire farm implements and machinery is another effective way for cash-strapped farmers to access the latest agricultural technology.

Even with the government strongly backing mechanization of farm implements and machinery, there are several disruptive factors that keep the Indian agrarian sector from pushing forward in this direction.

Indian farms are not as extensive as American and Canadian farms, and a large percentage of them, in fact, are small land holdings that often do not exceed 12 acres. Acquiring large and very expensive farm machinery for such small farmlands doesn’t make economic sense, especially given that most of the farmers are in the low to the middle-income bracket.

In hilly regions, land size apart, the terrain makes the use of large farm machinery unfeasible.

Another important factor is the financial inability of low-income farmers to afford high priced farm implements and machinery, even with government subsidy assistance. They have to recourse to high-interest rate loans that require collateral and debt repayment in a relatively short time frame, and which banks and other financial institutions often balk at issuing to them due to the risk of default.

The scarcity of trained technicians in rural areas to provide repair and maintenance services is another key hurdle. While many of the leading Indian manufacturers of agricultural implements and machinery do have engineers to provide after-purchase maintenance services, they may not be readily available in rural interiors. The availability and high prices of replacement parts – especially if they are of foreign make –  is also an issue of concern.

To produce higher crop yields to feed a growing population, a wider scope in farm mechanization is inevitable. Indian agricultural machinery manufacturers already dominate the Indian agrarian scene and are likely to continue to do so with more innovative implements and technologies for domestic and international agriculture markets.

Continued innovations in farm implements and technologies will make agriculture more sustainable for farmers, boost their incomes, and improve the overall condition of the Indian farming culture.

Farmers interested in purchasing agricultural implements and machinery can check out the available models on Khetigaadi. You can read the technical specifications of each model on the website, and you can also request a demo.

Different Types of Tractors and their Applications

Evolution of Tractors in India and Its Current Scenario