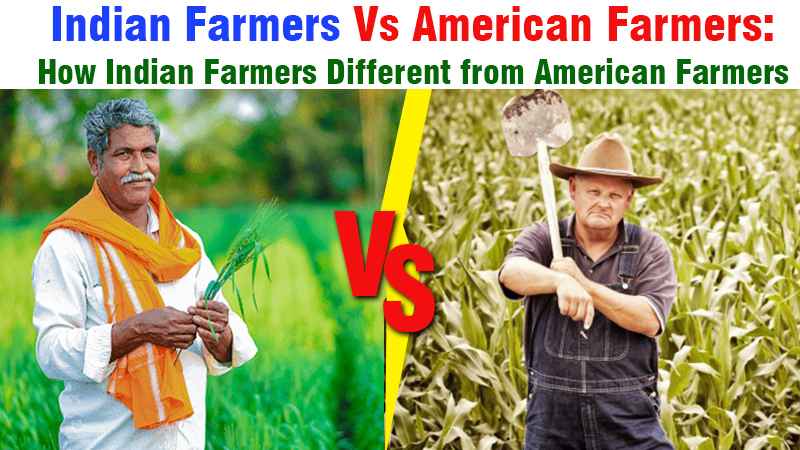 Dear farmers, as you all know agriculture is the main occupation in India. India is the top producer of many crops, however, revenue from the agriculture sector is low as compared to other developed nations.

In fact, sometimes our small and poor farmers do not get enough money for their basic livelihood. In this context today we are going to discuss how Indian farmers are different from American farmers.

Number of People in Agriculture Sector –

India is known as an agricultural country because almost 80 percent of its total population living in rural areas and depends upon the agriculture sector for their livelihood.

According to the census near about 120 million Indians are farmers and agriculture is their main occupation. On other hand in the USA only a small number of people take part in the agriculture sector, just 2.3 million Americans directly or indirectly depend upon agriculture.

Sizes of Land Under Agriculture –

In India, farmlands are inherited by family members from generation to generation. Because of the high population in each generation, the original area of farmland gets subdivided among family members.

Most Indian farmers have basically proceeded with their family profession. In their tutoring years, they might have invested time in helping their family members in the fields. They might have gotten fundamental knowledge at the school regarding cultivation.

Thus, the normal Indian farmer does not have any professional training in the agriculture sector. This is not the situation in the USA, American farmers are knowledgeable and will presumably have spent significant time in agriculture education at the college level.

So, they stay up with the latest innovative farm mechanization technology and commercial farming methods.

Indian cultivating is depending upon labour work, and most farmers utilize conventional strategies for cultivating like ploughing with bullocks or other domestic animals.

The quantity labour workers are low in America. Indian cultivating is still a lot of ward on the climate and, thusly, can become simply a few yields in a year, which is limited to one or two.

Then again, USA farmers can cultivate different yields in a single year, for example, soybeans, beetroot, notwithstanding wheat, and so on.

Because USA farmers exploit logical and mechanical developments and offices to improve their creativity levels. For instance, they might do soil testing in research facilities to realize the richness level of the farmland and the sort of yield most appropriate to develop beneficially.

Such testing is done occasionally empowers them to find ways to reestablish the soil richness. Indian farmers overall don’t approach such practices generally and don’t think about such potential outcomes.

Indian cultivating is intensely subject to the caprices of the precipitation. Along these lines, Indian agriculture is highly dependent upon rainfall for water requirements.

Interestingly, USA cultivating utilizes progressed frameworks of Irrigation techniques, which permit throughout the entire year creation. Indian farmers generally belong to poor families so there is a limitation for initial investment. Conversely, USA farmers are possessed by rich business companies.

Farmlands in the USA are more productive and bring back more prominent output for farmers. Comparison between farmlands of USA and India will show that USA farms have a better return for every hectare than Indian farmlands.

In this way Indian agriculture sector is work concentrated, depends upon traditional cultivating practices, and a large populace is subject to cultivating and most crops are rainfed.

On other hand American cultivating is capital concentrated, commercial cultivating and the low populace is subject to cultivating. Indian farmers have to go far to reach the current degree of USA farming. Indian government put so many steps to recover farmer’s situation in India.

How to Use Differential Lock in Tractor