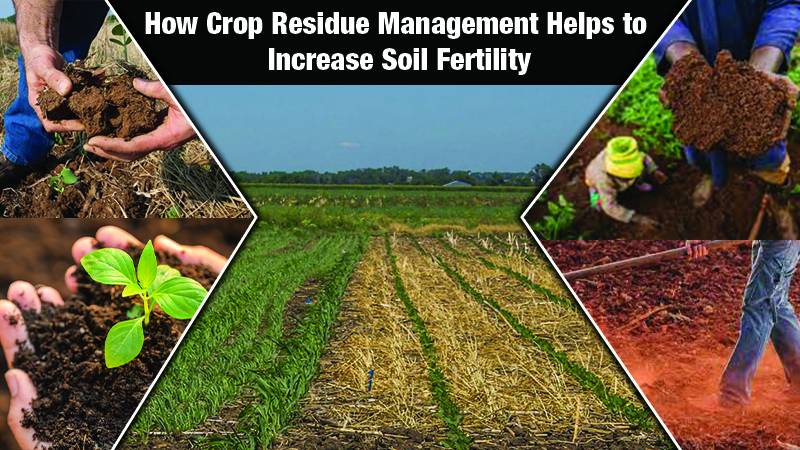 Plant residue is parts of plants like stems, leaves, and roots, that are left on the field after the harvesting. Previously, farmers believed crop stubbles to be junk, that was generally obliterated by fire. In any case, today this is not suggested and profoundly is not utilized by farmers. There are two distinct ways of overseeing crop stubbles/residue.

The principal technique is culturing earlier establishing when plant deposits are fused into the soil. Another advanced cultivating practice is diminished culturing or no-till cultivating, where crop deposits are left on a superficial level and planting is completed without soil tillage.

The farming area represents 15.96 percent of the complete GDP in India. In India, paddy is developed basically in Kharif season and wheat in Rabi season.

Non-accessibility of work labour at the hour of harvesting, interest for more cash and additional time are many such reasons, because of which machines are being utilized in plenitude by the farmers for reaping/harvesting. Because of this, in the wake of reaping, a lot of yield residue stays in the fields notwithstanding the grain.

Every year 630-635 metric tons of yield residue is created in our country. 58% of the all-out crop stubble creation is acquired from grain crops, 17% from sugarcane, 20% from fibre yields and 5 percent from oilseed crops.

Crop residue burning expands soil temperature and solidifies the soil surface. This builds the soil thickness and diminishes the water-holding limit of the soil.

Crop Residue Incorporation into the Soil –

The primary reason for furrowing crop residue is to further develop soil natural matter. Furrowing at a profundity of 20-30 cm along with adding nitrogen manures (Urea, CAN) advances the soil with humus and forestalls nitrogen melancholy.

Working on the actual construction of the soil structure – The expansion of yield residue to the soil decreases the hardness of the soil surface alongside the increment of natural matter. Aside from this, the water-holding limit and air course increments.

Further, develop soil richness- Expansion of harvest residue to soil works on the measure of accessible supplements and pH esteem.

Expansion in crop creation – On the off chance that the yield residue is blended in with the assistance of a rotavator in the soil, then, at that point, the usefulness of the harvest’s increments.

Likewise, be utilized as mulching – By utilizing crop residue Management  as mulch, soil moisture content can be rationed, and supplements and fruitfulness can be expanded. It likewise helps in weed control.

No-till is an advanced agriculture practice, for the most part, utilized by farmers. Almost 40% of cropland sections of land are not ploughed and in excess of 10 million sections of land of cover, crops have been cultivated.

The practice depends on leaving the yield residue on the field and the planting of new harvests straightforwardly into the untilled soil. No-till cultivating requires various practices to protect more significant returns, for example, cover harvests and treatment and pesticide use, to accomplish better soil properties. No-till cultivating enjoys additionally many benefits on the soil.

Harvest residue on the soil surface are liable for cooling the soil, expanding the soil dampness and restricting vanishing; crop residue shields the soil from disintegration and fills in as a wellspring of carbon

Large equipment passes are diminished; no-till cultivating utilizes just a planting machine, hence forestalling soil compaction and surface crusting. This makes it simpler for plants to grow and develop profound roots. It, in this manner, brings about diminished aggravation to the soil

No-till requires extraordinary no-till cultivating machines to open a limited space into the residue covered soil which is simply sufficiently wide to place the seeds into the ground and cover them with soil.

The objective is to move as little soil as conceivable all together not to carry weed seeds to the surface and to not invigorate them to grow. No other soil culturing activity is finished. The deposits from the past yields will remain generally undisturbed at the dirt surface as mulch.

Each farmer faces a few questions and battles in settling on choices about the best farm management practices. When settling on his harvest residue in the soil, a farmer must realize that both yield residue furrowing and no-till are acceptable farm management practices with various benefits. Try not to burn harvest residue since they assume a huge part in further developing soil, the burning residue consequently might harm the soil properties.

All in Detail About Disc Plough