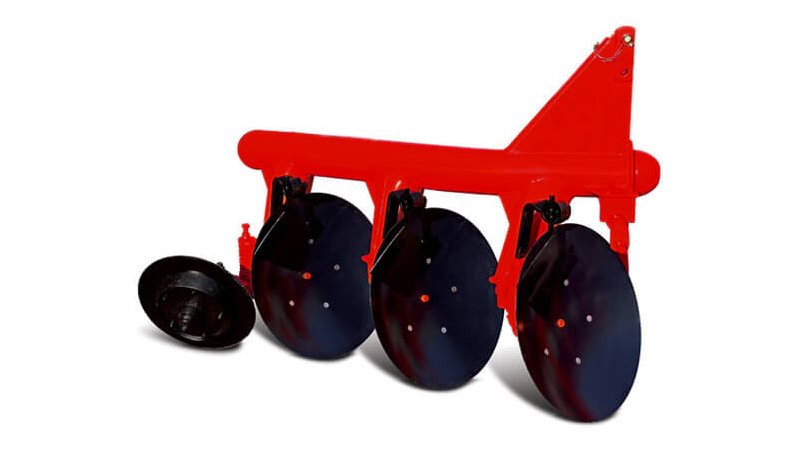 Tillage is the process of agricultural preparation of soil by mechanical implements of various types, such as digging, stirring, and overturning. Examples of manually operated tilling methods using hand tools, disc plough include shoveling, picking, mattock work, hoeing, and raking.

Mechanically operated tillage work includes plowing with moldboards plow or chiseling with chisel shanks, rototilling with rotavator, rolling with cultipackers or other rollers, harrowing with the harrow, and cultivating with the cultivator.

Tillage that is deeper and more thorough is known as primary, and tillage that is shallower and sometimes more selective of location is called secondary tillage.

Operations like Harrowing and rototilling of farmland are combining primary and secondary tillage into one operation.

The disc plough is such a farm implement, which is designed to work in all types of soil for functions.

This Disc Plough used to break the hardpan of new fields and to work in the stony areas.

Plough can be used easily in rocky and rooted areas. It is especially useful in hard and dry trashy farmland conditions and in soils where scouring is a big issue.

Plough is being produced with 2-3-4 and 5 bottoms with an option for an extra kit for furrow.

The disc plough’s is a rolling type plough, but the MB plough is not like that, which is dragged inside the soil.

The soil in which MB plough is either difficult or not advisable to operate in this soil disc plough could be easily operable.

This plough creates no suction. Disc plough’s penetration depends on the disc angles and the weight on the plough.

Plough inverts the soil pan when used with scrapers. It cannot be used at high speed because for cutting action slow speed is necessary.

The discs on a plough are mounted on bearings. Disc depth of cut 1/3rd of disc diameter and disc width of cut is 0.4 times the disc diameter.

They specified in terms of diameter and edge thickness i.e. 26 x 3/16 where 26 inches and 3/16 inch are diameter and thickness of the disc material in inches.

Discs could lift, pulverize, partially invert and throw the soil to an open furrow at one side Shallow concavity permits a greater angle to the line of travel.

It is the most essential part of each disc because each disc has one scraper Gives a good turning effect for better coverage.

Disc to get a better pulverization it is important to clean.

Scrapers to place low to catch and turn the furrow slice before it falls away from the disc.

It connects the disc bearing and plough frame. In some plough there is no standard but the frame bends downward for disc attachment.

Standards are attached to plough frame. The frame has the provision of adjustment of disc angle, adding weights.

Positioned at the extreme front of the plough & at a right angle to the frame. Ends of the cross shaft are cranked to which the lower links are attached.

This is the most important primary tillage implement. All types of disc plough’s with respect to famous implement brands, available at KhetiGaadi, com, Just go and check it.

Farm implements play a vital role for different purposes in farming. One amongst them is the disc plough.

To break the hard  soil, new fields and to work in stony areas disc plough functions variantly and smoothly. Disc Plough’s is a farm implement that is mostly designed for tillage in farming.

For each type and function disc ploughs are produced by different tractor and implement brands.

Guidelines To Strong and Safe use of Tractors on farms