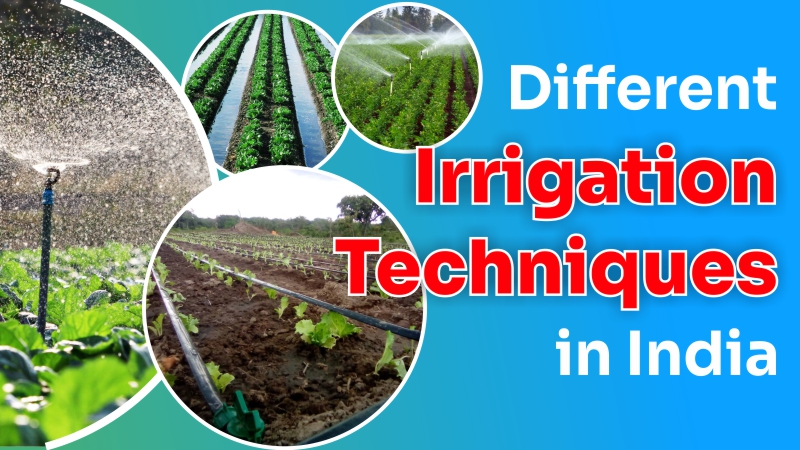 Any nation’s economy depends heavily on agriculture because it is essential to human and animal survival. Different Irrigation techniques are a key step in the process of growing crops. The term “irrigation” refers to the artificial application of water to soil or land. It is the replacement or addition of water from a different source to rainwater. It is utilized in arid regions and when there is minimal rainfall. It is regarded as essential input needed for agricultural production and basic infrastructure. The major goals of irrigation techniques are to maintain landscapes, maintain agricultural crops and vegetation with the least amount of water needed, and re-vegetate disturbed soils.

Additionally, sewage removal, mining, and dust suppression all employ irrigation systems. Drainage, which is the natural or man-made removal of surface and subsurface water from a given location, is frequently studied in conjunction with irrigation. Irrigation is used in crop production for a few more purposes, according to agricultural scientists, including protecting plants from cold, controlling wild plant growth in grain fields, and preventing soil compaction. On the other hand, rain-fed or dry-land farming is defined as agriculture that relies entirely on direct rainfall.

A few uses of irrigation in agricultural output are as follows:

The following are the main factors to take into account while planning irrigation:

Water is piped to one or more central sites throughout the field for overhead high-pressure sprinklers or guns to disperse during sprinkler or overhead irrigation. A solid-set irrigation system is one that uses sprinklers, sprays, or guns that are positioned overhead on risers that are permanently erected. Rotors are rotating, higher pressure sprinklers that are propelled by a ball drive, gear drive, or impact mechanism. Rotors may be made to revolve completely or partially. Rotors and guns are similar, however, guns typically function at much higher pressures.

In simple words, This technique involves spraying water into the air, which is then let fall like rain on the ground. Water under pressure is forced through small orifices or nozzles to create the spray. The sprinkler irrigation system is a very effective irrigation technique for shallow soils and uneven terrain.

In drip irrigation, water is supplied at a flow rate ranging from 2 to 20 liters per hour, close to the plant root, using emitters or drippers on or below the soil surface. By irrigating the soil frequently, the ideal level of soil moisture is maintained.

The most effective irrigation technique is drip irrigation, which may be used for a wide range of crops, including vegetables, orchard crops, flowers, and plantation crops.

Drip irrigation is basically a technique where water is applied gently to plant roots using a pipe system, either from above or below the soil’s surface. It is also referred to as micro-irrigation since it preserves soil nutrients as well as water. For drip irrigation, a system of tubes, pipes, emitters, and valves is used. The best feature of drip irrigation is the ability to manage valves and pumps both manually and automatically using a controller.

The earliest type of irrigation is surface irrigation, which has been around for a very long time. Water is moved across the surface of agricultural lands in surface (flood, or level basin) irrigation systems in order to moisten it and seep into the soil. Furrow, border strip, and basin irrigation are different types of surface irrigation. When irrigation causes flooding or nearly flooding of the cultivated land, it is frequently referred to as flood irrigation. This has historically been the most popular technique for irrigating agricultural land, and it is still in use in the majority of the world.

Where irrigation source water levels allow, levels are controlled by dikes, which are typically filled with earth. This is a common sight in terraced rice fields, or “rice paddies,” where the technique is applied to flood or regulate the amount of water in each individual area. In certain instances, the water is pumped or raised to the level of the land using human or animal force. Surface irrigation often has a poorer water application efficiency than other types of irrigation.

If the surface irrigation technique is properly chosen, it satisfies the following criteria:

Surface irrigation commonly uses basin irrigation. This technique is used to water orchards. Particularly in areas with narrow field layouts, it is helpful. A field is referred to as a basin if it is level in all directions, protected from runoff by a dike, and receives an uncontrolled flow of water. Although a basin’s shape is often square, it can also be irregular and rectangular. It may have raised beds for the benefit of particular crops, be ridged or furrowed, but as long as the inflow is unregulated and undirected into these field alterations, it remains a basin.

Trenches, or furrows, are drilled in a field of crops as part of the furrow irrigation technique. Farmers often use just gravity to carry water down the furrows, where it seeps vertically and horizontally to replenish the soil reservoir. Each furrow’s flow is independently controlled. Row crops, tree crops, and crops that would be harmed by direct flooding with water, such as tomatoes, vegetables, potatoes, and beans, can all benefit from furrow irrigation because the water does not come into direct contact with the plants. It is among the earliest irrigation systems. Because it is affordable and low-tech, it is especially appealing in developing countries or other locations where mechanical spray irrigation is not available or not viable.

How To Choose a Sufficient Tractor According To HP?