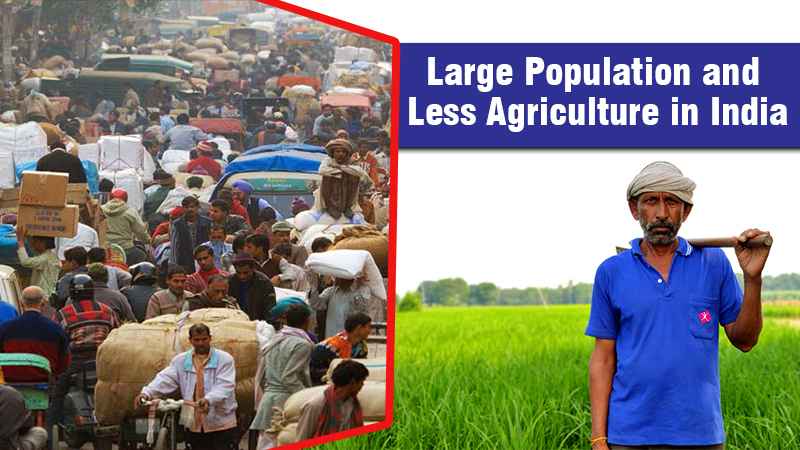 Agriculture is always been a vast topic to discuss for the growth of the economy and the dependency of the population over the system. India is a developing country and more than seventy-five percent population depends on agriculture in India.

Being the second-largest populated country after China India has allied records of villagers and farmers that have not remained to fulfill the growth of the country.

The overwhelming majority of the population lives in the country and did not get all the requirements of the daily needs. In this condition where agriculture supports the lives of the people that are also not fulfilling the whole needs of the farmers and other sector peoples.

We have been covered with the rural areas and since the last past years, the rural sector is growing economically to upgrade the system of the nation.

According to the survey India has crossed one billion population ranks and is estimated to surpass the Population of China. Now, the biggest quest arises in the human mind that how agriculture in India will Support the lives of the Indian peoples especially of the background of the rural sector.

Our nation is facing an intense problem of population outbursts. There are different kinds of problems that India is facing in regards to the shortage of food, climate change, energy crisis, malnutrition, and many more in severe conditions.

While large population seems to have large problems in many ways. If in this condition the main source of ‘agriculture’ livelihood of the people is not prevented then it could be a major drawback for the country.

In the rural sector, people are facing the problems like less drinking water, unemployment, less agriculture system, less production of crops, and many more.

So, people found the solution to migrate themselves to the urban areas were getting the opportunities of employment, good food, and water, the hope of good production of crops with the standard of tools and machines, etc.

So, these were the major challenging problems and threats facing by the people of the country on a larger scale. Let’s discuss what the government is taking action to overcome such problems.

Continuously, the government is taking an action to overcome the problem of the agriculture system and the increasing ratio of the population.

A very effective planned step has been taken by the government by launching various schemes NGO’s, organization institutions by creating awareness programs and finding the best results to deal with the major situation.

Better campaigns run by the government to educate people in terms of population and getting the better resource of the agriculture in India.

The government has launched various programs and schemes for the upliftment of the farmers and the rural sectors.

PM Kisan Yojna, PM Samman Nidhi Yojna is the primary schemes launched by the government to provide benefits to the farmers by increasing the income and other sources of income through these schemes and plans.

The largest NGOs, Government organizations, and institutions are participating at a larger scale for the growth of the economy and awarding the people regarding the importance of livelihood through the agriculture system. The people can sustain their life through own and live peacefully and comfortably.

Dependence Of Population And Agriculture

Agriculture productivity should be improved keeping in mind land, labor, and capital. Indian population is halved dependent on agriculture system and agriculture is rich in production of crops.

It means that the government should be focused on producing large varieties of crops being used for standard products and raw materials. Better agriculture inputs should be provided to the agricultural farmers to grow better crops and the people at large can get the benefits out of it.

The factors involved like the assurance of remunerative practices, agricultural inputs like land,  fertilizers, water seeds, crop insurance access, and infrastructure also dependent on each other overview with the activities related to agriculture. There is to be a need to focus on these activities from both the point of view.

The next thing covers that is dependent on people share for livelihood on agriculture whether it consists of landowners, tenant farmers and agriculture farmers who are employed on these land farms. The government should look forward to these plans and contribution towards these securities to protect them and give proper output results.

The estimated foodgrain production should be increased according to the population of the country and for future needs. Various plans and strategies should be developed for better crop output or results.

The major participants of the Food And Agricultural Organization are addressing at a larger scale keeping in mind the food security and nutrition of the people.

Keeping in mind the dietary needs that is primary to the people is focusing on producing and manufacturing dairy food products with reference to eradicate malnutrition problem from India.

Short-term and Long Term credit schemes are inaugurated by the government for the benefit of the farmers.

The agriculture system is the major procurement for the needs of the people and thus it should be focused systematically and independently.

Various tools and machinery, crop production activities need to be focused on for the better growth of the farming system, and for this, the government should take a keen interest in providing the good quality of food and other primary needs to the people at good quality and quantity.

For this, various programs are also launched by the government to provide a better system in agriculture. The population of the country is vast so it’s the duty of the people to protect and keep our agricultural livelihoods safe for the future concern.

This can be possible if followed with all the safety measures undertaken by the government plans and policies. Several plans and strategies should be taken by the farmers to increase the growth of the agriculture system that also helps in increasing the economy of the country.

IOT, Drones, Agro-Robots and Machine Learning the Latest Technologies in Agriculture and Farming 2019

Types of the Agricultural Cutter