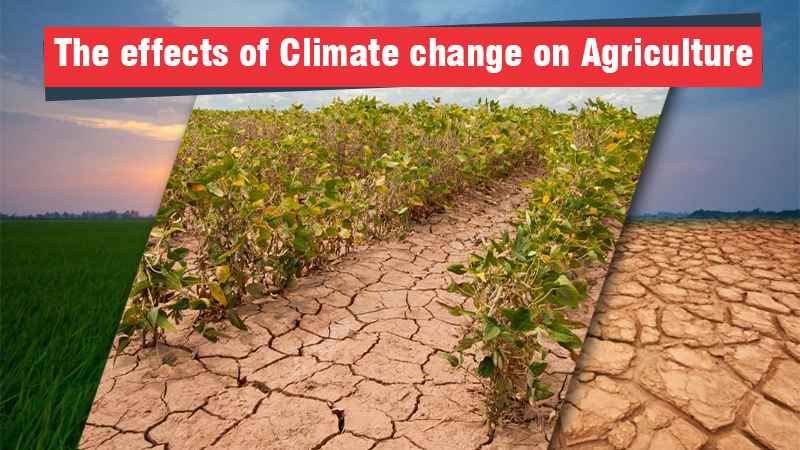 This effect is not certain and good for a longer duration. So, let’s discuss the varied impacts of climatic effects on agriculture.

The impact of monsoon or inconsistent weather also impacts the agriculture system wholly. It needs to focus and steps should be taken to procure the agriculture from climatic effect.

Climatic effects may also lead from the connection between industrial agriculture and the modern farming system.

It enables the land and baring conditions of land on at a larger scale.

Climate change wholly depends upon the subsequent changes of monsoon that directly impact to the agriculture or food security problem. Because through agriculture only we are getting the proper food and essential needs of crops.

The major challenge for agriculture is the consequences of heatwaves that can affect badly the plants, animals, land, and other sources of the agriculture system. The major impact of heatwaves is seen when the crop production or plants are flowering.

It wholly burns and destroys the fertility of crop production. On the other hand, heatwaves on animals can lead to low productivity, fertility, and impacts the negative in their immune system. It is not also good for crop production that may cause disease.

The impact of heatwaves may also lead to nonuniform and also existing with the issues of food security.

The climate changes may be projected to increase in the temperature and heat waves,

May also extend to large rainfall patterns that result to occur. While some states suffer from drought problems where Torrin rains are always the major concerned that increases flood and lead to destroying the loss of agricultural land. Some of the regions occur with warmer climatic conditions.

Measures To Be Taken For Preventing Climatic Effects On Agriculture

The proper measurement should be taken for the yielding process in agriculture. Proper data should be maintained while destroying crops as per the effect of climatic conditions.

Schemes and policies should be developed to cure the forecasting of the weather and climatic conditions so that future losses can be covered.

The government should take important measures for the future losses of crop production in the agriculture system.

Several technologies should be formulated for organic farming and a better organic system.

The better cure for the farming is No-Till Farming system. Under this method, it helps in preventing soil erosion and promotes sequestration, which is beneficial to farming and climate change. The method helps in decreasing soil depletion, tillage activities and improves the natural environment.

In the global climate change, smart farming is the best solution in agriculture farming. Precision agriculture is based on site-specific farm management which in return saves farmer’s resources and is good at reducing environmental pollution.

This can be controlled through advanced technological machine-like drones through which the satellite data can be collected for better intervention and processing in the farm.

Rainwater harvesting is an important method in preventing agriculture form through collecting economic rainfalls and water supply to the valuable drought areas. Extra inputs are required to save rainwater storage and operate easily for commercial use.

Under this method, one drawback is the count that it may cause that rainwater drops in the groundwater may lead to influence imbalance ecosystem

In way to resolve the problem of farming and climate change mulching or crop residue is the beneficial method. Apart from this, controlling the irrigation system vital for vegetation in agriculture improves the development and is good for the farmers.

Farmers should plough adaptive plants that are more vibrant to resolve the unfavorable climatic conditions. In such plants, it requires fewer pesticides and is good at the time of fertilizing or drought conditions.

As much as fewer chemicals spread on the crops the chances of winning the climatic change in agriculture increase.

The major climate change by agriculture is Deforestation. The natural calamities spoil natural sustainability which leads to a lack of fertility in used lands.

Another undesired agriculture impact is the biodiversity loss that impacts climate change such as the species cannot survive on typical weather conditions or distorted due to improper field activities.

Degradation of soil depletion is also one of the causes of the climatic change due to agriculture farming.

The other major consequence of excessive farming in the coastal areas of the water pollution may lead to different problems on the global level.

Crop monitoring is the best practice in reducing the effect of adverse climatic conditions. Adequate strategies should be set up for the better growth of agriculture or production of crops and prevent the climate from smart farming methods.

Better crop monitoring processes and other factors may lead to reduce climatic effects of agriculture in India.