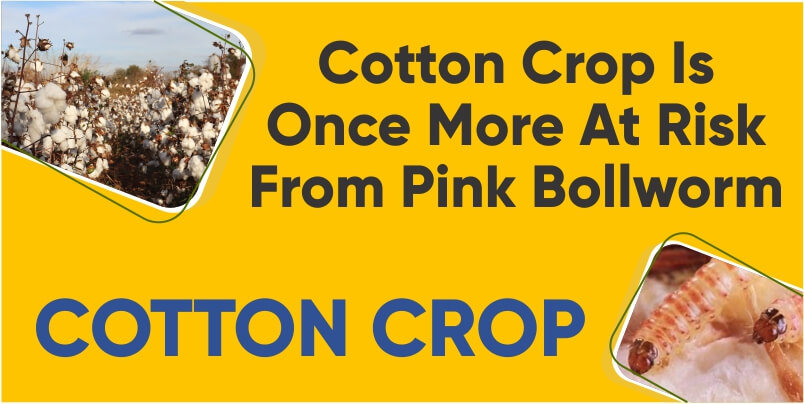 Pink bollworm can cause it in various ways. for instance damage of up to 55% and a yield reduction of up to 90% in seed cotton. Primarily, it affects the quality of the lint.

On around five acres of land this year, Gagandeep Singh of Burj Jabraan village in the Mansa region of Punjab sowed cotton.

Singh would not have been able to protect his crop from the Pink Bollworm insect, which has affected numerous farms in his districts and neighboring cotton-growing regions of Bhatinda and Fazilka if it weren’t for fast management measures.

According to Singh, the attack this year occurred significantly earlier than it did last year since there was almost no rainfall during the early stages of the sowing season.

Last year, the pink bollworm, or Gulabi Sundi as it is known locally, caused us to lose a significant amount of product, but this year, as soon as I noticed a modest infestation of the pest on roughly 2.5 acres, I began taking preventative measures. For the time being, this has lessened the damage, Singh told this reporter over the phone.

Singh was fortunate to find the pest in its early stages, but many other farmers have not been as fortunate. As the pink bollworm simply saps a cotton plant from its roots, they stand to lose a sizable quantity of output.

All of the early-sown cottons in Punjab and Haryana that have completed 45 days of their life cycle, according to scientists and researchers working in the field, are now vulnerable to the bug.

The late-sown varieties—those planted around the end of May—have not yet reached the point where the South Asia Biotechnology Centre’s (SABC) founding director Bhagirath Choudhary believes they will be vulnerable to the pink bollworm.

He claimed that whereas the cotton crop in North India takes roughly 170 days to harvest, the pink bollworm has a 30-day life cycle.

This means that there is a possibility of the pink bollworm germinating 3–4 times before the crop is harvested in crops that have already been in the field for at least 45 days.

What exactly is pink bollworm and why is it such a destructive pest?

Pink bollworm, also known as Pectinophora gossypiella, is one of the most frequent pests to infest cotton crops worldwide, and it has become a serious issue in India over the past few years, according to several studies and a note released by the SABC.

The pink bollworm outbreak was initially noticed in 2013–2014 in Gujarat, from which point it quickly multiplied and spread to other regions of the nation, including Maharashtra, Andhra Pradesh, and Telangana.

The cotton in Punjab, Haryana, and Northern Rajasthan, which are the main cotton-growing regions of the North, has been severely plagued by pink bollworms over the past few years.

India grows 12–12.5 million hectares of cotton annually, and during the past few years, pink bollworm has posed a danger to a large portion of this crop.

Pink bollworm, according to SABC, can cause locule damage of up to 55% and diminish seed cotton output from 35% to 90%. The lint quality is mostly affected.

Additionally, it has been shown that PBW infestation results in rosette blooms, drooping flowers, and early boll opening, which results in discolored immature fiber and lower-quality cotton yield.