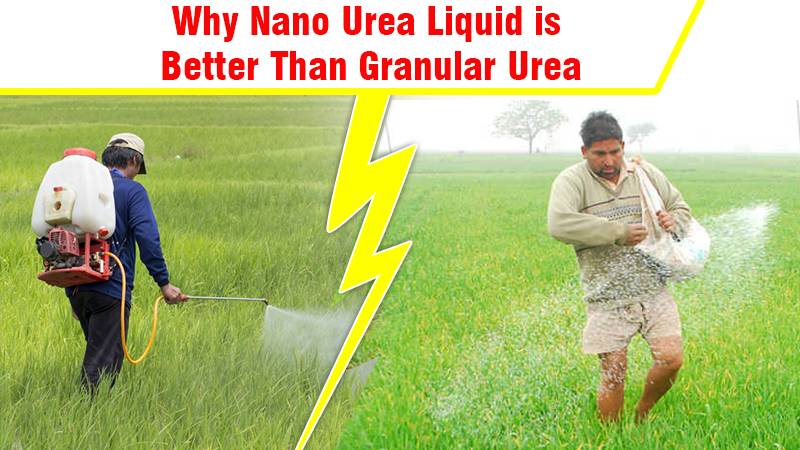 Agricultural reforms in India need to be kept in mind for better sustainable economic growth. Linking agriculture to the best fertilizer industry can be part of the strategy for better development.

In This scenario, the Indian Farmers Fertilizer Cooperative (IFFCO) claimed it has started commercial production of nano urea liquid. In this blog we try to explain all in detail about Nano Urea Liquid, just have a look.

What is Nano Urea Liquid

This Nano Urea Liquid is required to supplant the use of urea granules, perhaps the most broadly utilized manures in farmlands across the world.

Ordinary granular urea is quite possibly the main nitrogenous manures in the country, with a high nitrogen substance of 46%, and is accessible at one of the least market prices.

Urea additionally shapes 82% of the absolute nitrogenous composts devoured in India, with a yearly utilization of 33.6 million tons in 2019-20.

IFFCO Nano Urea is a result of the 21st century and it is the need of great importance to keep the climate soil, air, and water, for people in the future while getting the best atmosphere for all.

The new nano urea liquid will build the creation of yields with improved dietary quality.

Less expensive than customary urea, the new item is additionally expected to diminish the natural contamination brought about by the granular structure, by decreasing its inordinate application that compounds soil, water, and air contamination with environmental change issues.

How to use Nano Urea Liquid

First, wear mask and hand gloves then take IFFCO Nano Urea Bottle to Make a Solution. According to crop age and condition choose a concentration per lit of water.

For 30-40 days crop farmers can choose 4ml nano urea per liter of water. Mix water and nano Urea in a spray pump and spray it on crop leaves.

Points Keep in Mind While Use of Nano Urea

Why Nano Urea Liquid is Better Than Granular Urea

On a normal, a farmer in India applies two sacks of urea in one section of land for each yield season, with the amount differing somewhat as per the crop.

However, in the case of Nano urea liquid that a 500 ml bottle of nano urea can supplant one sack of ordinary urea as it has 40,000 ppm of nitrogen, which is an identical nitrogen supplement given by one pack of customary urea.

It was additionally discovered that nano urea is additionally set to supplant traditional urea as it can diminish the prerequisite of the equivalent by in any event 50%.

Likewise, the costing suggestion of nano urea liquid should make it more positive over ordinary urea as its 500 ml bottle will be evaluated at Rs 240. A 45-kg sack of regular urea costs Rs 267. This new item will fundamentally cut down the expense of warehousing.

It is demonstrated to expand the harvest yield by a normal of 8% alongside improving the nature of farm produce by giving better nourishment to crops.

Aside from being financially safe, nano urea liquid additionally vows to give a reasonable solution for plant nourishment as, despite lower use than granular urea and flow rendition, it gives higher supplement effectiveness to crops while diminishing soil, water, and air contamination.

As of now, only 30-50 percent of nitrogen from urea is used by plants in agricultural land while the rest goes squander because of fast synthetic change in light of filtering, which sullies soil and water bodies, and volatilization that causes outflows of nitrous oxide in the environment — prompting air contamination and a dangerous atmospheric deviation alongside low wholesome effectiveness for the yield.

Be that as it may, while traditional urea is powerful only for 30-50 percent in conveying nitrogen to plants, the viability of the nano urea Liquid more than 80%.

A significant justification for this increment ineffectiveness is a direct result of the way that nanotechnology, which is the foundation of this new type of urea, empowers planning tiny particles that offer higher surface-mass proportions, and help in the controlled conveyance of plant supplements.

The size of one nano urea Liquid molecule is 30 nanometers and contrasted with the ordinary granular urea it has around multiple times more surface region to volume size.

Because of the minuscule size and surface properties, the nano urea Liquid gets consumed by plants more viably when splashed on their leaves.

Upon infiltration, these nanoparticles arrive at plant parts where nitrogen is required and discharge supplements in a controlled way, consequently decreasing use while additionally lessening wastage into the climate.

In This way, Nano Urea Liquid is another high-tech step towards modern agriculture. Download KhetiGaadi Mobile Application for more details about the agriculture and fertilizer industry.

Reasons to Buy Eicher Tractors in 2021

10 Best Vegetables That Can Grow in Indian Tropical Climate