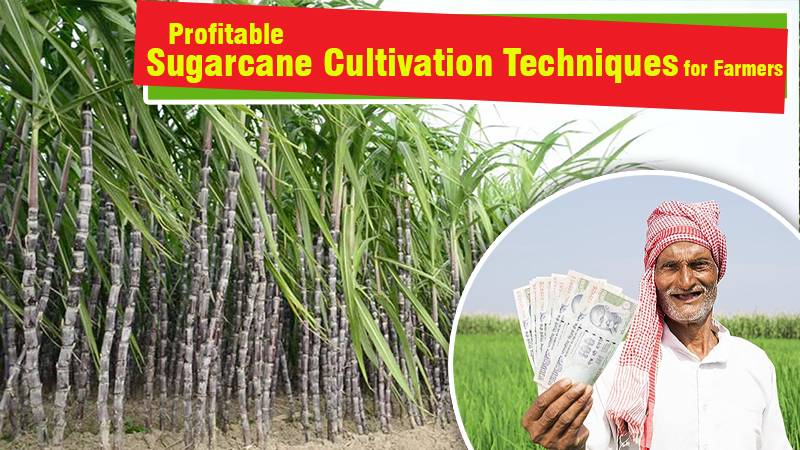 The sugarcane industry in India is the second biggest agriculturally based industry close to cotton in which higher venture is made and has achieved attractive changes in social, financial, instructive, and political life in the rustic region.

Thus, Farmers need better-developing tips for sugarcane in concern with climate and high returns. Here are a few tips to develop sugarcane adequately.

A dry technique for planting ought to be followed. Sets ought to be put 5 to 7.5 cm profound into the soil. Care ought to be taken to position eye buds on the side and covered them with a thin layer of soil.

Medium to fine finished, high in natural matter status, drained, and having pH between 6.5 to 8.0 soil is ideal for sugarcane crop. Sugarcane crop doesn’t endure if electrical conductivity of immersion concentrate of soil is up to 1.7 millimhos/cm.

It requires a hot and humid environment with a normal temperature of 21°-27°C and 75cm – 150cm precipitation.

The legitimate time for furrowing is following the former yield is collected or soon after decent precipitation is gotten.

The land is then presented to climate for a little while and afterward, the harrow is worked three to multiple times to break hunks and to make the land smooth and even. Before last cultivating by the cultivator, the suggested portion of organic fertilizer is applied and blended well in with soil.

Precautions to Be Taken While Applying Composts in Sugarcane Field –

Single, two and three eye bud techniques for planting can be used. But two eye bud technique is mostly suggested. Around 25,000 two eye-sprouted sets will be needed to plant a one-hectare region.

Seed treatment with heated water at 51 oC for two hours or sodden air treatment at 54 oC for two and half hours. If new sets are not accessible for planting, sets ought to be plunged in the arrangement of 500 g lime in 200 liters water for 12 to 24 hours. To increment natural nitrogen obsession and dissolvability of phosphatic manures, setts ought to be treated with Azotobacterial and Phosphate solubilizing inoculants.

Hoeing is done first by a week or so in the wake of planting to break the surface hull, else light irrigation is trailed by a similar period to help the development of fledglings. After the fledglings are out, the hoeing by farm implements is followed to control weeds just as for relaxing surface soil.

On the off chance that the weeds are more, the hoeing is trailed by hand weeding. One to two hand weeding and one hoeing are given inside 6 – two months in the wake of planting by which time the first top dressing of nitrogen compost is given.

Rather than burning stubble after the collection of past sugarcane crops, it ought to be spread equitably in the middle of the lines or in substitute line of the ratoon crop. Stubbles over the ground level should be shaved within 10-15 days after harvest of plant crop.

Gaps in ratoon should be loaded up with the saplings brought up in poly packs by the single eye bud technique. The hard and conservative mass of soil close to the root zone ought to be relaxed by breaking the soil by plough close to the root.

Compost dosages should be given at 10 – 15 cm profundity according to the timetable After the harvest of sugarcane inside about fourteen days every one of the activities referenced above ought to be finished and following the manure application first irrigation must be given.

Sugarcane intercropping can be done with short-span vegetable yields like Cabbage and cauliflower were discovered to be highly useful for the farmers. In spaces of satisfactory irrigation facility, planting one line of soybean or dark gram assists with expanding the soil fertility and sugarcane yield.

Impacts of Cyclone Fani on Agriculture and Farmers in Odisha

Why Farmers Are Protesting Against Farm Bills