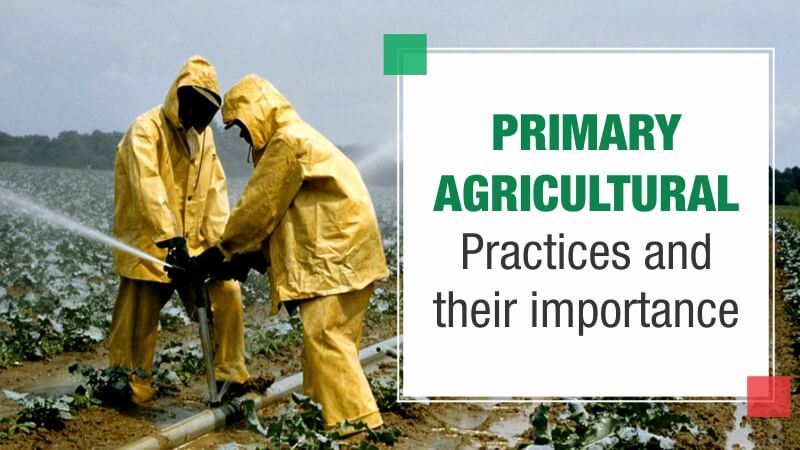 Certain factors must be addressed in agriculture, such as the type of crop, soil qualities, climate, and so on. Farmers choose which crop to produce at what time of year and in what location based on these characteristics. However, proper soil, weather, and seasons are insufficient to generate a significant product. It necessitates a series of procedures that must be performed. Agricultural practices refer to the procedures used to cultivate crops. The little parcels of land are used to generate food that not only feeds animals but also humans. Since the old period, good agricultural practices have been practiced.

What is agriculture, exactly?

Agriculture is the cultivating and production of crops and plants, as well as the breeding of livestock for economic and human requirements. When we adopt organic agriculture, plants and animals thrive. Agriculture is extremely important in India. India is the world’s second-largest staple food producer. Depending on the crop, agricultural practices play a significant influence in achieving high yields. The seven steps of agriculture practices are soil preparation, seeding, manuring, irrigation, weeding, harvesting, and storage. Excessive use of pesticides and fertilizers in agricultural techniques can result in large crop yields, but it also pollutes the land and air. The effective application of agricultural practices promotes healthy living and feeds our country’s enormous population.

Here are some examples of basic agricultural practices?

Environment Management: A environment is the visible aspect of a piece of land, its landforms, and the combination of natural and man-made factors. Physical features, water bodies, landform, indigenous plants, human elements, constructions and buildings, and climatic variables are all part of land use planning. In agriculture, environmental management is extremely important. As a result, it ranks #1 among agricultural approaches.

Soil/Land Preparation: Soil/Land preparation is critical as it plays a key role in germinating seeds. Ploughing, levelling, and manure application are three main processes in the soil preparation process before the crop is planted.

Ploughing, levelling, and manuring the soil in which a crop will be grown are all steps in the process of cultivating a crop. The process of loosening and excavating dirt with a plough is known as ploughing. This contributes to optimum soil aeration. In the process of levelling, the earth is uniformly spread and levelled after it has been ploughed. After that, the soil is manured.

Ploughing/tilling: It is a method of loosening and turning soil with a plough. Plough, hoe, cultivator, and other implements are used to plough the soil.

Tilling is a type of agricultural land preparation that involves mechanically cracking the soil apart. However, it mainly refers to the process of sifting and stirring through the chunks and fragments of dirt by “combing” or “raking” the surface. The procedure only goes a foot deep. Tilling should only be done to a depth of 12 inches or less.

This was done by hand hundreds of years ago, usually with a hoe, rake, or shovel.

Ploughing is a more difficult form of tilling. Plowing is the vigorous overturning and mashing of the earth to uncover the soil beneath the topsoil, rather than scraping the topsoil for a leisurely sift through. This will reveal the worm populations that have been hiding beneath the dirt. Along the route, it crushes any garbage, small plants, and weed roots. This delivers new nutrients to the level while burying earlier crop residues, enabling them to decompose.

This was done centuries ago by placing a plough behind working animals (horse, water buffalos, cattle, etc.)

Levelling: Assists in the breaking up of large lumps of soil, as well as protecting the soil from erosion and improving water absorption during irrigation. The leveller tool is in capable of this. In agriculture, land levelling is used to alter the land topography to create a desired terrain surface with specific field slopes, changing water circulation on the soil surface, improving irrigation and drainage, and increasing the efficiency of cultivation activities.

When considerable amounts of topsoil are taken from some sites and deposited on others, removing the crop’s major source of nutrients, soil fertility may be harmed, at least in the early years after exposure to low fertile soil layers, necessitating additional soil amendments and fertilizers.

Manuring: Adding manure to soil improves its fertility. Natural sources include dead plants, humans, and animals, as well as excreta and other wastes. Manuring is the act of spreading manure across a field. It is beneficial because it adds organic matter and nutrients, such as nitrogen, to the soil, which are absorbed by bacteria.

The Importance of Soil Preparation:

Irrigation: Water is the most important essential for plant growth. Irrigation is the process of providing water to growing plants using various means. Excessive water can harm crops and cause waterlogging. Because the irrigation interval and frequency vary depending on the crop, they must be maintained. Ponds, wells, canals, lakes, and other natural sources of irrigation are examples. Moat, Rahat, and chain pumps are examples of old irrigation methods. For a greater supply of water, modern irrigation agricultural practices include drip irrigation and sprinkler irrigation.

Weeding: Weeding is the process of eliminating weeds. These are undesired plants that grow alongside the primary plant and are potentially dangerous. They can be physically removed with your hands or using weedicide sprays.

Crop Protection: Crops must be defended from pests, high rains, and natural disasters such as floods. Crop quality suffers as a result of the lack of protection. Pests can lower crop yields and boreholes in the plants.

To Know more about agriculture, install the KhetiGuru application that provides you with all agricultural information and also gives you expert advice for farming-related problems. To get the tractor, tractor price related information visit the KhetiGaadi website.

Rainwater Harvesting and Storage System For Gardening Use