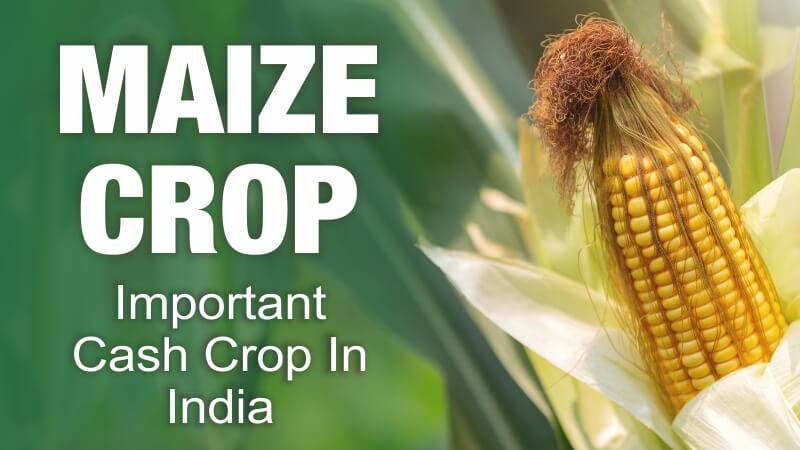 Industrial farming, consumer demand, and modern technology with advanced tractors are the defining features of the global revolution in agriculture. One of the fastest-growing cash crops in the world, maize is utilized as a key raw ingredient in the food processing, poultry, dairy, meat, and ethanol industries in addition to its traditional applications. The most frequently grown cereal crop in the world, maize has the highest yield of all the cereals. In addition to being utilized in animal feed and several industrial applications, it is a significant food staple in many nations. Due to the crop’s high genetic variety, it can grow in temperate, subtropical, and tropical regions.

India is fourth in area and seventh in production among nations that cultivate maize, accounting for about 4% of the global area and 2% of total production. In India, the area planted with maize in 2018–19 was 9.2 million ha. In India, maize is produced all year long. With 85% of the area under cultivation during the season, it is mostly a Kharif crop. After rice and wheat, maize is the third-most significant cereal crop in India. It produces about 9% of the nation’s total supply of food grains. Andhra Pradesh and Karnataka produce the majority of India’s maize, generating 38% of the country’s total in 2010–11.

The majority of the maize grown in India is utilized to produce poultry feed. The poultry industry is strongly dependent on maize since it makes up between 25 and 35 percent of the input needed for layer feed and between 50 and 60 percent of the input needed for broiler feed. When compared to other alternatives, maize is the favored source of energy in feed due to its availability, higher energy content, and cost-effectiveness. Over the previous 4-5 years, the proportion of maize used for poultry feed has stayed at 45–50% of the nation’s overall maize demand.

In the past, maize was utilized less for commercial purposes and more for local use. Due to rising income levels that have reduced the cost of preferred cereals like wheat and rice and increased commercial demand from the poultry and starch industries, which has led to higher farmer realization, maize consumption for direct human consumption has decreased over time and is predicted to decrease even further.

Madhya Pradesh and Karnataka, two Indian states, have the largest percentage of land planted in maize (15 % each), followed by Maharashtra (10 %), and Rajasthan (9%), Uttar Pradesh (8 %), and other states. Bihar produces the most maize after Madhya Pradesh and Karnataka. State productivity is highest in Andhra Pradesh. Some areas, including Krishna and West Godavari, have productivity figures of up to 12 t/ha.

Maize is responsive to both more and less water. Soil with good drainage is preferable because it allows water to flow off while still retaining enough moisture. In other words, irrigation needs to be governed appropriately. Since the flowering period is crucial for producing the most yield, moisture levels must be kept at their ideal levels during this time. The most desired technique of irrigation is drip irrigation, which should be used once every two days to maintain adequate moisture retention.

Maize is a Kharif crop because it needs a decent amount of rainfall followed by a healthy period of sunshine. Typically, sowing takes place in the months of June and July. However, it is also sown in September and October and in the months of January and February. When producing seeds, the monsoon season must not fall within the seed maturation period. As a result, farmers sow between the months of November and December to produce seeds.

Since maize cannot withstand cold, it is seeded as a Kharif crop in India right before the monsoon season. About 70 mm of rain is needed. The best weather for maize production consists of periods of sunshine and rain. It can withstand temperatures as high as 35°C.

For maize growth, a pH range of 5.5 to 7.0 and excellent drainage are preferred. Maize can grow in loamy sand, black dirt, or even clayey loam. It is stated that red soil and alluvial soil are both ideals for cultivating maize. However, even soil that is extremely fertile, needs a good amount of organic matter. To improve the soil’s ability to drain, it is advisable to mix a significant amount of sand with black soil of the clayey variety. Growing maize is not recommended on soils that retain water.

Loamy sand to clay loam is only a few of the several types of soils where maize can be cultivated successfully. However, soils with high water holding capacity, neutral pH, and good organic matter content are thought to be good for increased productivity. It is preferable to stay away from low-lying fields with poor drainage and fields with higher salinity since this crop is vulnerable to moisture stress, especially excess soil moisture and salinity strains. Therefore, the fields with adequate drainage should be chosen for maize growing.

Maize prices have risen steadily over the past few years, and since maize is a key raw material for both starch and chicken feed, it has an impact on margins because it takes time for the price increase to be passed on to consumers.

Because maize has a good demand in the starch and feed meal industries, the government has been offering price support mechanisms to encourage farmers to plant it. To encourage farmers to plant more maize instead of paddy, the government has for the first time ever set the MSP for maize for the 2013–14 crop season at Rs 1,310 per quintal, the same as that for common paddy. When compared to other crops, maize has similarly experienced the largest CAGR in MSP, at 13.3% over the past few years.

Save The Water: 10 Ways to Save Water for Indian Farmers

Tractor with Cage Wheel for Puddling Operation in Rice Cultivation