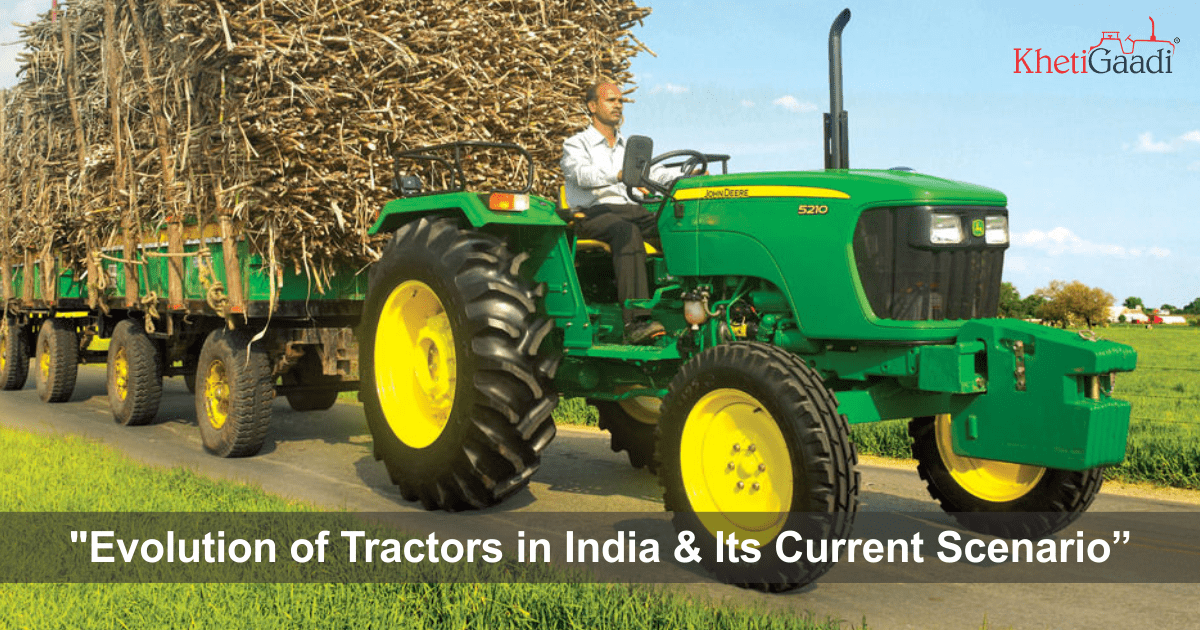 Evolution of Tractors in India

Agriculture is one of the most important economic sectors in India, directly or indirectly affording employment to over 70% of the country’s population, making up nearly 25% of the country’s GDP, and accounting for over 13% of the country’s exports. India is the second largest agricultural producer in the world and produces rice, wheat, pulses, spices, sugar-cane, oil seeds, fruits, vegetables, groundnuts, cashew, tea, jute, cotton, and other crops for domestic consumption as well as for export to other countries. The highest crop output comes from the states of Maharashtra, Gujarat, Punjab, Haryana, Uttar Pradesh, Bihar, West Bengal, Madhya Pradesh, and Andhra Pradesh, and farm mechanization has played a decisive role in this,  particularly the widespread use of tractors.

Please explore a variety of farm machinery and equipment, along with their details and specifications, on khetigaadi.com.

Evolution of Tractors in India

The very first tractors in India were imported by the British government in 1914 for the purpose of clearing bushes and shrubs from degraded forest areas and to use this cleared land for agricultural purposes. While these imported tractors were mainly used in governmental farming operations, they were also made available for hire to landowners that could afford them. By 1930, while the use of tractors in farming still remained limited, an indigenous industry of manufacturing tractor spare parts and engines sprang up in India.

After India became independent in 1947, the Indian government placed great emphasis on reforming and modernizing the agricultural sector to pave the way towards food self-sufficiency. More land was brought under agricultural cultivation and more tractors were imported to speed up this task. These tractors were rigorously studied by Indian manufacturers, already well-versed in producing tractor parts and engines, and modified to suit Indian conditions, and, in 1961, Indian manufacturers began bringing out the first Indian-made tractors. Five major tractor producers: Eicher Motors, Gujarat Tractors, TAFE Ltd., Escorts Tractors Ltd., Mahindra & Mahindra. Domestic tractor production increased in the next ten years, but tractors still continued to be imported from the former Soviet Union, Poland, Romania, Czechoslovakia, the UK, and other countries.

In the 1970s, the Indian government banned tractor imports and imposed high duties and taxes on imported tractor parts, and focused its attention on promoting more indigenous tractor manufacturing. Indian companies, in collaboration with foreign manufacturers, began producing most of the tractors that were used in India. Escorts Tractors Ltd.’s 35 HP tractor became a bestseller at this time. Tractor production continued to grow and, by 1980, India began exporting Indian-made tractors to other countries.

This was the era of the Green Revolution, and, along with boosting tractor production, the Indian government set up agricultural corporations at the state and national levels to offer every kind of agricultural assistance to farmers. This included offering them 25% to 33% subsidies to buy Indian-made tractors. Indian banks were also directed to offer loans with low-interest rates to farmers for the purchase of agricultural machinery.

By 1990, the annual production of tractors in India was 140,000 (source) and it grew to be over 2 million in 1997. With the economic reforms that took place in this decade, more Indian players like Bajaj Tempo Ltd. and Sonalika International Tractors Ltd. entered the tractor industry. Mahindra & Mahindra overtook Escorts Tractors Ltd. and TAFE Ltd. to become the foremost manufacturer of tractors in India.

From 2000 to 2018, the Indian government began encouraging and funding the establishment and growth of custom-hiring centers around the country to make it easier for Indian farmers to have access to expensive and otherwise unaffordable farm machinery. These custom-hiring centres are mainly operated by tractor companies, entrepreneurs, and non-governmental organizations, but individual farmers that own tractors have also launched into the business of hiring out their tractors to other local farmers during planting and harvesting seasons. The formation of co-operatives by farmers to pool their resources for buying farm machinery is also a growing phenomenon in India.

Indian is one of the largest producers of tractors in the world, manufacturing around 660,000 units per year. The main centers of tractor production are in the states of Karnataka, Maharashtra, Tamil Nadu and Gujarat, and the top domestic markets are in Maharashtra, Punjab, Haryana, Uttar Pradesh, Madhya Pradesh, and Andhra Pradesh. Indian tractors are also exported to other countries in Asia, Africa, Europe, and America.

Types and Uses of Tractors

The most commonly used tractors in Indian are four-wheeled, 31 HP to 40 HP tractors. These can be put to multiple agricultural uses, and, aside from their price, this is the main consideration that farmers make in their purchase. Aside from their use in farms, orchards, and gardens, these tractors can also be used to haul produce, goods, equipment, and any other loads from one destination to another. To be able to drive the tractors on roads though, it is necessary for farmers to register them with the transportation department first.

Tractors are also used in construction activities, in garbage collection, and in many other non-agricultural activities.

Higher horsepower tractors between 41 HP and 50 HP are also a growing market segment in India, but, with their very expensive pricing, they are mainly employed on larger farms.

Indian farmers have become more aware of the benefits of farm mechanization and the role of the tractor in reducing farm labour drudgery, making multiple crops possible in a single year, speeding up farm operations, and reducing overall farm expenses.

Government funding and subsidies, as well as the availability of nearly 95% credit from commercial banks, state land development banks, regional rural banks, and other financial institutions, have made it possible for a growing number of farmers with small-sized and medium-sized landholdings to purchase tractors. With the problem of rising labour scarcity due to increased migration to urban areas, better work opportunities in other sectors, and government employment schemes, having a tractor has become more or less of a necessity for many farmers. Without it, they wouldn’t have sufficient manpower to complete all the essential farming tasks.

ACE Harvesters Benefits To The Farmers