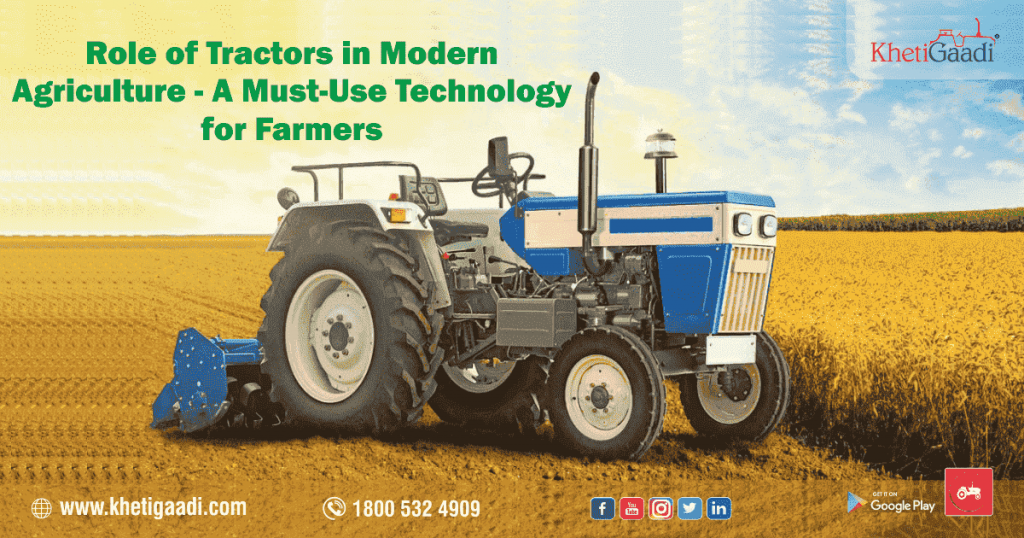 Modern Agriculture : The tractor is perhaps one of the most essential farm machines in India and around the world. It has played a significant role in the fundamental alteration and development of agriculture in modern times. The advent of tractors has relieved humans and draft animals of strenuous and time-consuming drudgery have facilitated faster farm operations and have helped improve overall farm production. Modern agriculture without tractors is simply unthinkable.

To explore the varieties of tractors and other farm machinery that are currently available in India, along with their technical specifications and other details, please visit khetigaadi.com.

The Invention of the Tractor and its Market Growth

Mechanization of agriculture was an outcome of the Industrial Revolution in Europe. There was a concerted effort during this period to come up with machinery that would replace human and animal labour and also get more work done in a shorter amount of time. The development and refinement of steam engines was a major step towards the invention of tractors. In 1849, the Philadelphia-based A. M. Archambault & Company built the first steam-powered machine that could chop straw, cut wood, and thresh crops. These early farm machines were either fixed in place or were hauled by horses or oxen. It wasn’t until the development of the steam traction engine that could power the wheels that it became possible to have farm threshers that could be mechanically driven to the threshing site.

While the steam-powered threshers were certainly an improvement on manual labour, they had severe drawbacks. They were large and difficult to operate, they were expensive to manufacture, purchase, and maintain, and they could also be hazardous; there were instances of fires starting from flying sparks. Something more reliable, safe, and practical was needed, and this came about in 1876 with Nicholas Otto’s four-stroke internal combustion engine. Later inventions of the petrol, diesel, and gasoline engines further helped in the development of tractors.

An American inventor from Illinois, John Carter, is credited with building the first tractor with the Otto engine in 1889, and a year later, John Froelich from Iowa invented the first gasoline-powered tractor that could be driven back and forth. Froelich helped start the Waterloo Gasoline Engine Company in 1895, and the company gained recognition for their best-selling Waterloo Boy tractors. The company was later taken over by John Deere in 1918.

The first industrial production of tractors was begun in Iowa in 1902 by the Hart-Parr Company.  Henry Ford began manufacturing tractors that he called ‘Automobile Plows’ in 1907 and the Holt company began producing ‘Caterpillar’ track tractors in 1908.

Tractors found widespread use in the USA and Canada and were instrumental in bringing huge tracts of land under cultivation. These early tractors were behemoths and not affordable for all farmers. Following the economic downturn of 1914, it became clear to the tractor companies that if they were to stay afloat they needed to come up with smaller, easier to operate, and less expensive tractors that within the range of most farmers. Tractor companies like the Bull Tractor, Hart-Parr, International Harvester, Case, Allis-Chalmers, and Ford began producing such small tractors and sales began picking up. The demand for tractors soared after the First World War, with production reaching 20,3000 in 1920. To stay afloat in the Great Depression era, the tractors companies reduced their prices and competed with each other to produce more innovative tractor features. By 1930, over a million tractors were in use in the USA.

The popularity of the tractors was also growing, in the meantime, in Europe. In Germany, the Moorburg Tractor Works began manufacturing caterpillar track tractors in 1921 and Benz-Sendling produced the first diesel-operated tractor in 1922. Over 20,000 German farms were using tractors for agricultural purposes by 1933. In Switzerland, in 1939, the Hürlimann Company brought out the first 4–cylinder diesel direct injection tractor.

Low prices, coupled with innovative features such as air-filled tires, diesel motors, air cooling systems, three-point linkages, front loaders, and load carriers increased the use of tractors in agriculture. Tractors became a must-use technology for farmers, and, with the development of precision farming and a need for increased food production, the demand for tractors has continued to grow. China and India are the largest markets for tractors but tend to use lower HP tractors as compared to the higher HP tractors that are more commonly used in the USA, Brazil, Russia, and Western Europe.

According to a market forecast report by Technavio (https://www.reportlinker.com/p02754065/Global-Agricultural-Tractor-Market-Infiniti-Research-Limited.html),  the tractor sector is expected to produce 2 million units worldwide by 2022.

Tractors have been used in Indian agriculture since 1914. They were imported by the British government to bring more land under agricultural cultivation, but their use was mainly limited to governmental operations; they were also hired out to rich Indians who could afford to rent them from the government. Since getting replacement parts and engines for these tractors from England was very expensive, these parts and engines began to be produced in India and a thriving industry had developed by the 1930s.

After Indian independence, Indian agriculture received a boost from government initiatives to modernize farming. Tractors were imported from the Soviet Union, Romania, Czechoslovakia, Poland, UK, and other countries to help increase agricultural productivity. They were often modified locally to suit Indian farming requirements, and Indian manufacturers studied their construction and began producing Indian-made tractors. In 1973, the Indian government banned tractor imports and encouraged indigenous manufacturing of tractors. By the 1990s, most of the tractors used on Indian farms were produced by Indian manufacturers such as Mahindra & Mahindra, Sonalika Tractors, Standard Tractors, the Escorts Group, Balwan Tractors, HMT Tractors, and others. In recent times, the easy availability of credit for purchasing tractors and the production of higher HP tractors that are capable of deep tilling as well as performing other farm and non-farm tasks has spurred the growth of mechanization in Indian agriculture.

In addition to fulfilling the domestic demand for tractors, Indian tractor manufacturers also export tractors to other countries in Asia, Africa, and America. The appeal of Indian tractors lies in their reliable engineering and their comparatively low prices.

Social and Economic Impact of Tractors

The tractor has, undoubtedly, had a tremendous social and economic impact on agricultural societies. Mechanization of many agricultural tasks that were previously performed manually has freed up the animal and human labour. Since the practice of keeping draft animals and cultivating meadows for their feed is no longer necessary on many farms, farmers can save on these costs and make more land available for cultivation. Farm workers can be diverted to other farm tasks or can find altogether different occupations in other industrial sectors. Opportunities in other sectors, as well as lack of work in rural areas, has led to a growing influx of migrant workers to urban areas and, in India and many other places, this phenomenon has resulted in the mushrooming of large slums.

The population migration is also responsible for an increased and urgent need for more farm mechanization in rural areas as farms now face a critical shortage of skilled,  experienced farm workers. Governments around the world are investing more in R&D to come up with further innovations that will resolve many of the existing agricultural issues. Such innovations are likely to push up the costs of tractors and farmers may have to rely more than ever on government subsidies and loans. Farmers can also form cooperatives to purchase tractors or turn to Custom Hiring Centres and hire tractors and other farm machinery as and when needed.

In the long run, however, marginal and small farmers in India, who generally own seven acres of land or less, may not be able to compete in terms of agricultural productivity with larger land-owning farmers, and, with increasing land fragmentation, may perforce have to seek other avenues of livelihood.

In the coming years, we can expect more innovations in tractors. It will be common to see autonomous tractors that drive themselves through the field and sync with other autonomous farm machines to get all the necessary farm tasks done. Such machines will only need to be programmed in advance to perform their tasks or they may be operated remotely by the farmer. The tractors will be equipped with motion detection sensors to help them navigate, with sensors to collect soil and weather data, and with climate controlled cabins and Internet connectivity.

If you are interested in seeing current tractor models that are available for sale in India, please visit and browse through the Khetigaadi website. Read the technical details and specifications of the different tractor models, and inquire about a demo to get a better idea about how the tractors operate.