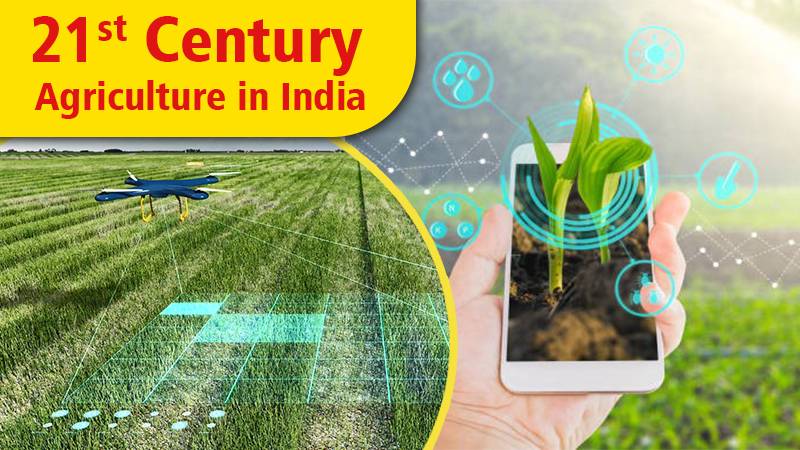 Agriculture has always been proceeding in different categories from time to time. Being the largest source of livelihood of the human’s agriculture system is still adopting the new ways of technologies and resources to stand in the 21’st century in India.

The contribution Gross Domestic Product helps in increasing the economy of the country but the place taken by the other sectors has reduced the GDP by 20% and this has made our people self-sufficient and made our country free not to be dependent on others for food.

India is the largest producer of crop production. The nation is also blessed with a portion of arable land with different climatic zones that are good for the different kinds of crops production.

The contribution of agriculture production has grown since independence and happy news for the farmers is that the industrial sector is also contributing and providing the largest facilities for the benefits of agriculture in India.

The rise in the country through the major source of agriculture production.

In the 21’st century, the rise of agriculture has grown increasingly with the demand for the production of crops and food by the other countries too. It has also been the major exporter of crops like wheat, rice maize to the other parts of the countries and helps in increasing the profit of the country.

So, agriculture in the farming system helps in encouraging the essential needs of the farmers and providing various benefits at a larger scale.

Modern techniques and methods adopted by the farmers are the keys to the success of the booming sector of agrarian. In the present life, the participation of government role by inaugurating different schemes and plans helps the rural areas, farmers, small farmers to the greatest extent.

Firstly, the education system has shown a keen interest in educating the people and helps in understanding the better growth of the agriculture system in future. While introducing different techniques and new methods help in introducing new plans and strategies.

Innovation of new technologies that help in reducing cost and made them work faster for the farmers. Introducing new varieties of tractors and implements in different brands is the key to success for the farmers in participating in the work of the farming activity. New machines and implements help in the growth of the agriculture sector and operating easy working of operation.

Research and development by the private or government institutions to make the farming system more systematic and agile in the upcoming years. Information technology is playing a vital role in booming the agriculture sector.

The participation of the IT sector will be a major growth to protect the crops from any harmful hazards. It also helps in cooperating with the agriculture communitive societies bearing the problems of smallholders farmers and protecting them from all causes.

Agriculture is the booming sector amongst the other sectors. But, still, due to lack of certain facilities, this sector is lacking behind due to not receiving the resources at the proper time.

For, this the government is equally contributing by various means in booming this sector. Let’s know how the government has contributed to the agrarian sector and helping the farmers.

The government is implementing several plans and schemes for the benefit of the farmers keeping in mind their salary or income on the yearly basis. For this, the government has started some schemes like PM Kisan Yojana Scheme, PM Kisan Samman Nidhi Yojna, PM Kisan Khaad Yojna, etc.

Under such schemes, the government provides benefits to the farmers by transferring the amount of 6000 on the yearly basis on the basis of three installments.

New startups help the farmers by educating the people by telling them the importance of investment in this sector by various means of policies and get the best result in return.

The Cumulative effects of technology will further help in changing the face of agriculture over the next decade.

An advanced cropping method adopting of new agriculture farming, methods adopting for improving the soil conditions, weather forecasting reports, encouraging for marketing and exports of products, creating awareness programs for the benefits of the farmers and focusing on investments.

The government helps in generating and collecting enormous amounts of data in monitoring policies with an aim of stimulating developments.

Another major participation of the government in the agriculture system or the farming system is by enforcing policies. These policies permit allowing the permission, licensing on the major projects of agriculture.

The major role of the government in the agriculture sector is empowering the farmers especially smallholders by educating them, by providing them the basic amenities for the benefit of the agriculture society.

As we can see in today’s scenario agriculture sector is growing as the fastest means of a booming sector in all phases. The rural sector to urban areas farming system has rapidly increased by the major participation of government enactments, non-government organizations, various institutions, frameworks, etc.

Agriculture is the main source of the people that provide good nutrient food and supply to the other parts of the country at a larger scale.

Still, efforts are being made to accept the challenges and create opportunities for the growth of the agriculture sector and lead in increasing the economic policy in the 21’st century in India.