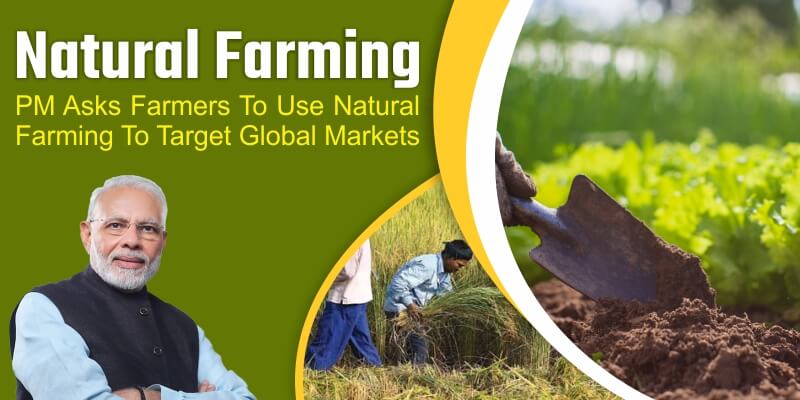 On Sunday, Prime Minister Narendra Modi stated that the wide adoption of natural farming would be a great success, and the sooner farmers make the switch, the more benefits they will experience.

According to Prime Minister Narendra Modi, the broad campaign for natural farming will be very successful in the upcoming years. The sooner farmers adopt this transformation, the more benefits they will experience.

He highlighted the “amazing success” of the Digital India Mission while delivering a video address to a conference on natural farming held in Surat, Gujarat. He claimed that it is the nation’s response to those who once claimed that bringing about change in villages is difficult.

By preserving the quality and fertility of the land, he claimed that adopting natural farming is similar to helping Mother Earth. It is also the “foundation for economic success,” he added.

The natural agricultural model emerging from Surat, he added, can serve as a model for the entire nation. He praised the efforts made in this area in Surat.

“In the upcoming years, this widespread movement in favor of ecological farming will likewise achieve great success. Farmers will have a better chance of benefiting from the adjustment if they adopt it sooner rather than later “added he.

The PM stated that if the nation’s citizens become committed to achieving a goal, no obstacle will stand in their way. Even difficult work will be successful if people participate in it, he claimed.

“The country’s response to those who formerly claimed that delivering change to villages is difficult is the astounding success of the Digital India Mission. Our villages have demonstrated that they can both initiate and spearhead change “said he.

According to Modi, natural farming affords India the chance to lead the rest of the world in the direction of sustainable growth and pure food by disseminating its advantages through the nation’s countless years of knowledge and expertise.

“India has long been a world leader in this field. Thus, the moment has come for us to advance down the route of natural farming and fully exploit the arising worldwide potential “added he.

According to Modi, successful farming practices are also essential for the economy.

“As our farmers thrive and advance, and as our agriculture advances, so will our nation. By converting to natural farming, you help Mother Earth and preserve the productivity and quality of the soil. Natural farming benefits the ecology and the natural world. Serving the Gaumata (holy cow) is another benefit of joining natural farming “said he.

Following 75 years of independence, India has begun working on a number of these objectives, which will serve as the foundation for significant improvements in the future, according to him. “In ‘Amrit Kaal,’ the spirit of everyone’s labor, which is driving our growth path, is the foundation of the progress of the country,” he continued.