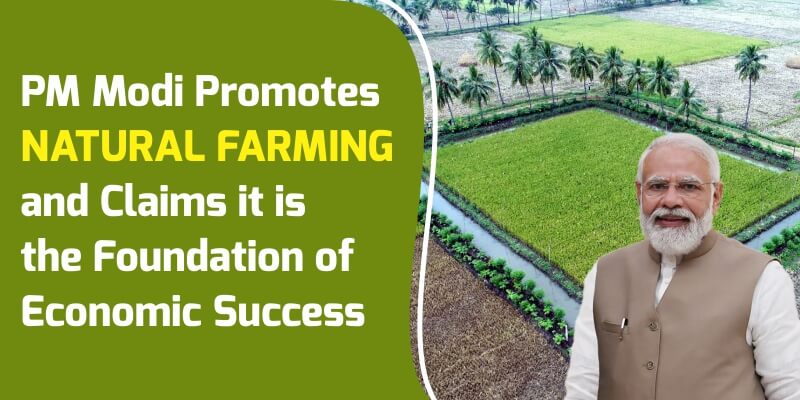 The prime minister went on to say that every industry, including agriculture, which is still the main source of livelihood, needed research and innovation to find solutions. All Indians but around half rely on agriculture for their livelihood.

He asserted that ground-breaking innovation will advance development as a whole. He stated that research and development need a new impetus and came up with a new tagline.

He emphasized Lal Bahadur Shastri’s campaign anthem, “Jai Jawan, Jai Kisan,” stating it was “still a major source of motivation.” Later, Jai Vigyaan was added by Atal Bihari Vajpayee, and the people gave it a priority. “Jai Anusandhan” must now be included (research and innovation).

Chemical fertilizers must be used less frequently. Atma Nirbhar India, however, is “not merely a government effort,” but rather a “common national movement,” according to Modi, who also stated that chemical-free and natural farming can aid Aatma Nirbhar Bharat.

“Natural farming now can lead to Atma nirbharta.” Farming without chemicals and using natural methods can strengthen our nation. Costs of fertilizer can be reduced with natural farming. Our responsibility is to practice chemical-free and organic farming, Modi said. The prime minister continued by stating that small farmers can benefit particularly from natural farming.

Estimates from the industry suggest that due to increased commodity and oil prices as a result of the conflict in Ukraine, the Union government’s expenditure on fertilizer subsidies for the current fiscal year may reach 2.10 lakh crore. Spending on fertilizer subsidies will reach a record level. While only around half of India’s annual use of di-ammonium phosphate is imported, nearly all of the country’s potassium chloride fertilizer needs are met by imports.

Modi has launched a significant campaign to increase palm-oil plantations in various areas, particularly the Northeast, in an effort to lessen the country’s excessive reliance on pricey edible oil imports.

Vegetable oils, a foundational element in most everyday cuisines, are the most popular import from India in the globe due to consumer demand. Imports can meet up to two-thirds of the country’s domestic demand.

The PM brought up the country’s ethanol blending program when talking about the sugar industry. “The 10% ethanol blend target seemed to be a somewhat lofty objective. Our past experiences led us to believe that this might not be possible, but the country has already met this goal ahead of time.

The goal year for a 20% ethanol blend would be pushed forward to 2025, according to Modi’s statement on June 5, 2021. The Union Food Ministry created a plan for doing this.

An important component of India’s push for self-sufficiency is the initiative for ethanol blending. If India combines gasoline with ethanol, which is made from molasses, a byproduct of sugar production, it will purchase less oil. Additionally, ethanol can be produced from maize and rice. India is the third-largest oil consumer in the world, behind the US and China. It spent well over 100 billion on imported crude oil in the years 2018–19 and 2019–20.

The prime minister also advocated for water-saving farming techniques. “Water must be made available to every farm by the government. Every farm, though, must operate under the tenet of “per drop, more crop.”

Khetgaadi provides you with all the latest updates related to tractor, tractor price, agriculture, etc.