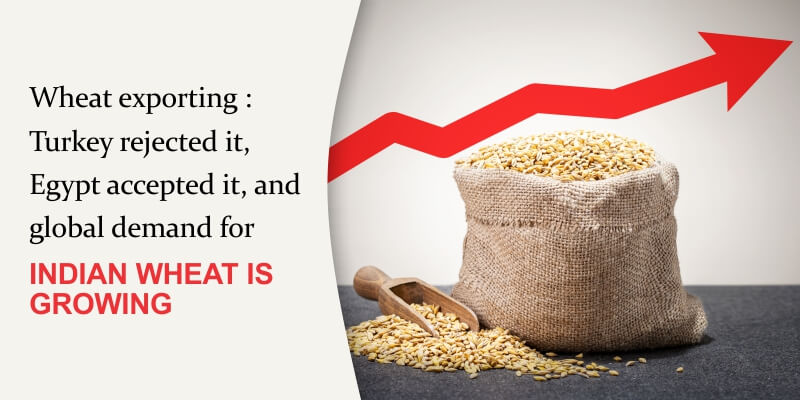 Egypt’s official experts appreciated the quality of Indian wheat after having it tested according to international standards. Egypt is now confident in its ability to purchase wheat in the future.

Wheat Cultivation for Health: India has produced a remarkable amount of food grains in recent years. Food grains, fruits, vegetables, and other food products cultivated in India are increasingly being exported to other countries. There has been a huge surge in demand for Indian wheat even throughout the Russia-Ukraine conflict. Turkey declined to acquire 55,000 tonnes of wheat from India, claiming that it was infected with the rubella virus. On the other hand, Egypt imported this wheat after Turkey rejected the wheat consignment. Not only this, but Egypt has also praised its quality after testing Indian wheat on the basis of international standards.

India got a new foreign market: After Egypt approved the import of Indian wheat, now India has got a new foreign market. Egypt is an African country, where India had not yet exported wheat. Egypt is confident of procuring Indian wheat in the future also after meeting international standards. An official Egyptian team was present in India before buying Indian wheat. For the purchase of wheat, the Egyptian team got the wheat tested in laboratories and after being satisfied with the results, Egypt approved the import of wheat. Along with this, India was also appreciated for the quality production of wheat.

Indian wheat is pleasing to the world: Let us tell you that many countries around the world hold top positions in the import-export of wheat. Where EU wheat is being sold in the international market at a price of Rs 43 per kg. So at the same time, the price-quantity of wheat in India is 26 rupees per kg. Most countries are now importing wheat from India by exporting good quality wheat at affordable rates. Because it is cheaper and better by Rs 17 as compared to the wheat of the European Union. Other countries are also exporting wheat at the rate of $450-480 per tonne.

Increased demand for Madhya Pradesh’s wheat: Although the highest quality wheat is cultivated in most of the states of India, the wheat exported to Egypt has been grown in Madhya Pradesh. This is not common wheat, this wheat is used in making exotic dishes like macaroni and pasta.