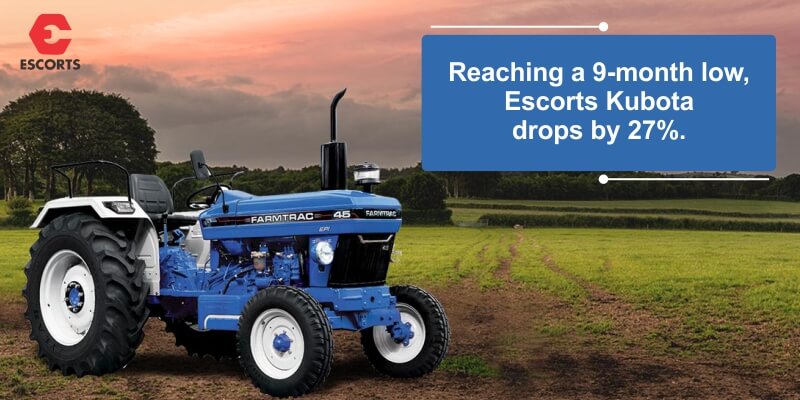 The stock has decreased 9% over the past three days of trading, and on Thursday it also went ex-dividend for Rs 7 per share. Escorts Kubota shares dropped about 4% on the BSE during intraday trade on Thursday, reaching a nine-month low of Rs 1,422. This was due to worries that continued escalating raw material costs would delay the near-term demand impetus. Today was also the ex-date for the cash dividend of Rs 7 per share on the shares.

The stock has now traded lower three days in a row, losing 9% of its value. Since August 2021, its quotations have declined to their lowest level. With the most recent loss, Escorts Kubota’s stock price has fallen 27% from its all-time high of Rs 1,930 reached on April 5, 2022.

The business operates in the fast-growing industries of agricultural machinery, material handling, construction equipment, and railroad equipment. By contributing to additional equity shares, making an open offer to Escorts’ public shareholders, and joining hands with the Nanda family, the company’s current owners, Kubota has expanded its equity position in Escorts to 44.8%.

With the recent government actions, inflation may stabilize soon, and operating leverage may help even more in possibly partially offsetting the effect on margins in the approaching quarters for the tractor business. Due to the government’s focus on infrastructure, we predict a significant recovery for the Escorts Construction Equipment Segment in the second half of the current fiscal year 2022-2023. The company’s management, which on June 1 announced sales results for May 2022, stated that the high rise in input costs, which increases customers’ owning expenses, continues to be a key source of concern.

The company forecasts that starting in Q3FY23E, inflation concerns will gradually subside. But it plans to raise prices and cut costs to protect margins. In the last 18 months, Escorts has increased prices in the tractor segment by a total of 12–13%, with an under-recovery of 4%. In its Q4 result update, an analyst at Edelweiss Broking stated that the management warned that persistent increases in raw material costs could have an effect on profitability and slow the momentum of relatively close demand.

A sustained tractor loop recovery is likely to be advantageous for the company since higher MSPs and normal monsoon forecasts are generally favorable for the industry. The brokerage firm stated that Kubota’s expertise might hasten market share increases in the premium tractor and export markets.