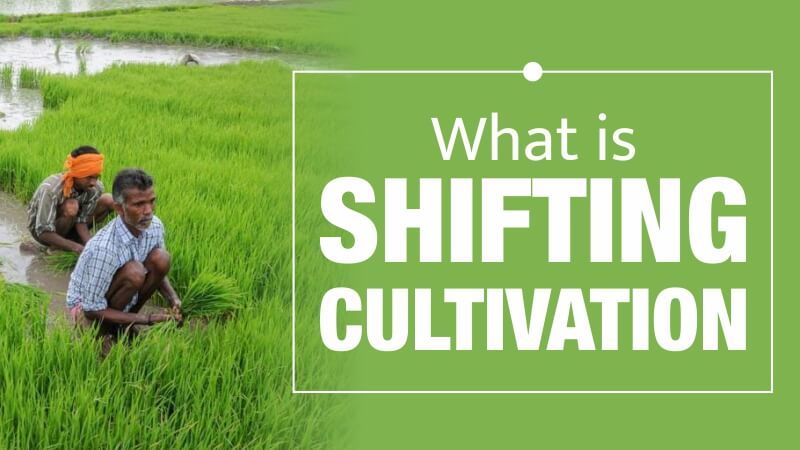 Shifting cultivation is the process of using a plot of land intermittently for crop production before allowing it to revert to its natural vegetation for a number of years. Usually, the area is stripped of all vegetation, planted with crops for two or three years, and then left fallow for ten or more years. The vegetation is trimmed, and the debris is burned, to enable cleaning of the ground before cultivation. Slash-and-burn agriculture and fallow agriculture are other names for the method.

The tropics, where farming practices are less advanced in terms of technology, are where shifting agriculture is most prevalent. Plant nutrients are typically scarce in the soils. Following land clearing, cultivated crops are supported for two or three years by the nutrients deep-rooted trees, bushes, and other plants bring to, or near, the soil surface. With natural management, the soil can support only modest plant growth after a few years because the cultivated crops or leaching consume the available nutrients. After that, it is permitted to revert to its natural vegetation, which gradually concentrates the nutrients in the topsoil once more. The cycle then repeats again after some time. During the cultivation period, erosion on sloping ground is frequently severe.

Place and Crops for shifting Cultivation:

The majority of India’s northern states, including Assam, Manipur, Mizoram, and Arunachal Pradesh, engage in this form of farming. It is primarily used in hilly regions. In addition to India, it is also performed in the central, western, and southeastern rain forests of South America.

Most farmers who employ this technique do so in order to support their daily lives and have two square meals. From the same field, they produce a wide range of crops exclusively for themselves. Food crops, vegetables, paddy, beans, millets, and other crops are typically grown.

The farmer prepares the land for cultivation by clearing it beforehand. Then he clears the land of all flora and plants. He carefully burns all of these plants. Every time it rains, the water washes plant ashes into the soil, enhancing its fertility by introducing potash.

Swidden is the name of this cleared ground, which is currently ideal for cultivation and will be suitable for crop production for the next two to three years. Without the use of a plough, holes are dug in the soil before being filled with seeds by typically female laborers. They merely complete this activity with the use of basic tools like digging sticks or dibblers.

Children and women work together to cultivate the crops for their food. When the soil fertility starts to decline after three years, it can no longer support the soil’s ability to feed the crops. They stop cultivating the grounds and begin the other one. After fifteen to twenty years, people return to develop that ancient land after letting it gradually regain its fertility.

This approach has been abandoned in many nations in favor of farming that uses more advanced technology. In the northeastern states of Orissa and Andhra Pradesh, farmers in India continue to use this traditional technique. Odisha is the state having the largest area under shifting cultivation.

As a result of the increasing population, land replenishing used to take 20 years, but it now only takes 4-6 years.

Solutions if there are failures in Shifting Cultivation:

Doubling of Farmers Income by 2022