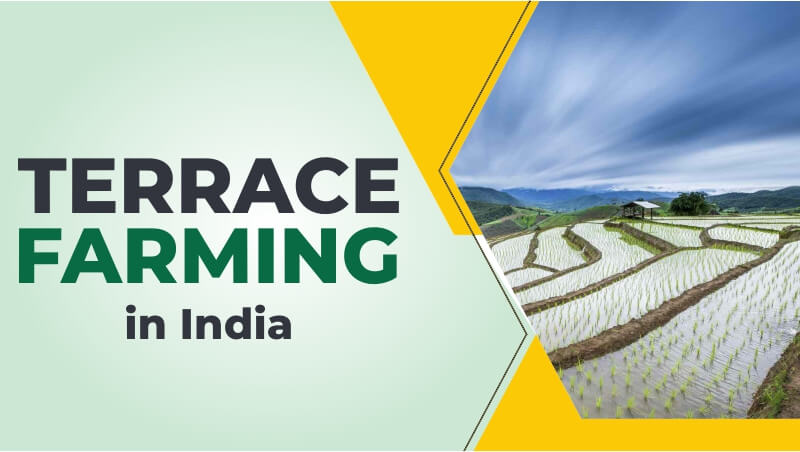 Terrace farming is a practical and frequently the only option for farmlands with hills. But its benefits are numerous. Terrace farming serves a purpose that extends far beyond cultivating places that would not otherwise be suited for agriculture. Terrace farming also promotes soil conservation by reducing soil erosion. The technique can now be used to grow a variety of crops, and internet farming software makes management easier.

Terracing is a farming technique that involves building particular ridged platforms to reorganize farmland or convert hills into farmland. Terraces are the name given to these ridges.

Excavating and moving topsoil to create agricultural areas and ridges is terracing agriculture’s primary (and distinctive) characteristic. The trick is that when the upper platforms are filled, water rushes down to the lower ones. As a result, the water is dispersed more or less uniformly over the area rather than only at the base of the slope.

Depending on the soil infiltration characteristics, cultivated areas in agricultural terracing might be either flat or slanted. If there is enough soil infiltration, they are leveled. Usually, outlets are not also necessary.

In farming, grassed backslope, broad-base terracing, and narrow-base terracing are the most common varieties. The decision they make is based on how steep the hill is. The farming of all terrace slopes is not implied by all types, therefore.

Terrace cultivation encompasses all slopes and is appropriate for even the gentlest hills. Because of this, they ought to accommodate machinery requirements, and the terrace spacing is ordinarily equal to the number of machinery swaths. It is not permitted to traverse the ridges; instead, the machinery must move between the terraces through designated. The equipment must move between the terraces using specified channels; it is not permitted to cross the ridges. Broad-base terracing can be used on slopes as steep as 8%.

This kind of terrace is another illustration of perennial terracing, although in this case, both the front and back sides are covered in continuous plants. These components are not grown. The earth is typically shifted from downhill, similar to the grassed back slope. Even so, this method of terracing is the steepest and uses the least amount of ground for platforms.

The Advantages Of Terrace Farming:

Terrace farming stops rain from washing away soil nutrients. Healthy crop growth results from this. Second, it stops plants from being carried away by swiftly running rivers of water. Sometimes rainwater washes crops away, resulting in low agricultural output. Thirdly, terraces aid in reducing water loss and soil erosion. The fourth advantage of terrace farming is that it has brought us to the barren hillside terrain. Finally, terraces collect rainwater, enabling people to grow crops like rice, which require a lot of water to grow.

Bench, contour, and parallel terraces are three types of terracing that are frequently utilized. The layout of each is indicated by its name.

Agricultural bench systems include level or almost flat farming platforms arranged at regular intervals, similar to benches or steps over a hill. Such a routine arrangement implies significant soil disturbance and is labor-intensive. The slopes could be made of solid ground, covered in perennial plants, or reinforced with stones.

Since bench terraces enable water retention, rice is the crop most frequently bench terraced in agriculture. For this reason, a terracing design like this is inappropriate in situations like.

These terracing systems mimic contour strip farming by tracing the contour of the relief. Point rows and grassy waterways make up terraces. These platforms are simpler to set up, but because of the abnormalities in the space, farming operations are difficult for them.

Constructions should be kept as parallel as possible because they are the simplest for farming operations. If the slope prevents that, they are constructed using land-leveling techniques. Although it makes moving machines easier, it is labor-, money-, and time-intensive. In this context, it will occasionally make sense to leave those portions alone and cover them in perennial vegetation or use them as grass rivers.

An illustration of a crop grown via terrace farming

Apples, subtropical and temperate fruits, including nuts and dry fruits, are the main fruit crops.

In the highlands of the western Himalayas, prominent commercial crops include tea and beans.

How Can Terrace Farming Aid In Soil Conservation?

Since water flows do not wash the topsoil and nutrients away, terracing aids in the retention of soil cover and fertility.

What does terracing mean for soil conservation?

Terrace farming is a productive method of conserving soil. But it also has to be regularly inspected and maintained. The ridges and grass cover must therefore be checked for efficiency in terrace farming, and if necessary, they must be improved. The sedimentation of channels, a problem with terracing practice, is also addressed by cleaning and planting buffer strips. Additionally, the pipes and outlets need to be clear of debris and vegetation residue that could clog them.

What Effects Does Terracing Have on Soil Erosion?

Terracing avoids the development of soil-eroding rills since water drains through specified outlets. What steps can terrace farming take to stop soil erosion? In reality, terraces reduce the slope’s steepness by dividing a large slope into multiple smaller ones, making the force of water generated by gravity less harmful.

Terracing is not the sole method for halting soil erosion, though. Furthermore, vegetation on the front and rear slopes reduce the possibility of damage from wind and water.