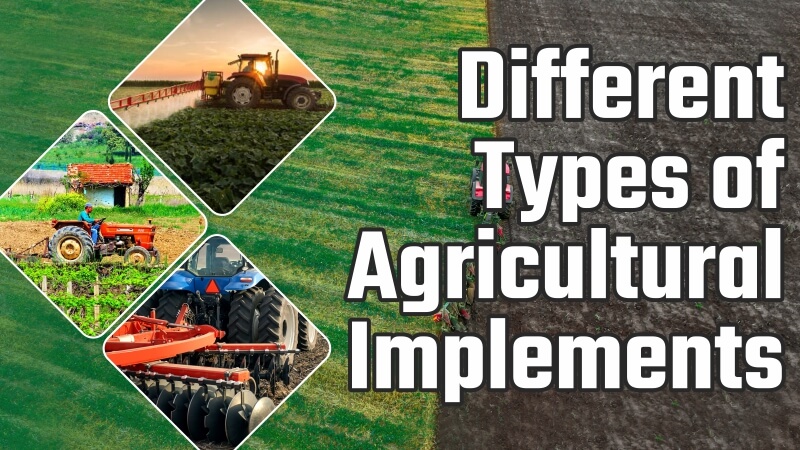 Because the competitive world cannot meet the expanding demand of individual humans without them, implements play a key role in modern scientific farming techniques. Seed drills, cultivators, harrows, several types of hoes, pickaxes, spades, sickles, and kauri are just a few of the many tools used in farming today, especially in nations where it is thought to be the most frequent and well-liked form of employment.

Various kinds of implements are employed in the agriculture sector. The significant ones are briefly noted and discussed below:

b) Soil Cultivation Implements: These implements or machinery plough the soil to prepare it for the cultivation facilities. Examples of these kinds of implements include drag, spike, and disc harrows.

c) Planting Machines: After the soil has been prepared by cultivation, several planting machines are used to plant seeds and saplings in the field. Transplanting tools, seed drills, air seeders, precision drills, and broadcast seeders are all very useful for achieving this.

d) Harvesting Implements: As their name implies, these tools are helpful when it comes to gathering ripened and fully grown crops from the field. These machines include, among others, pickers, diggers, and trailers.

e) Miscellaneous: In addition to the tools and machinery indicated above, other types of equipment such as shredding, loading, and haymaking machines are also found to be useful in the completion of the harvesting process.

The term “agricultural implements” does not always refer to the only ones described above. There are a number of other instruments that aid in agricultural activities and increase productivity and efficiency of tasks.

“Implements By Type” Are Listed Below:

For initial soil preparation before planting or spreading seeds, use a reversible MB plough. is frequently used for deep tillage of land to help break up the top layer of soil, introduce new nutrients to the surface, and remove weeds and crop residue. Additionally, it aerates the soil, improves its ability to retain moisture, and makes it hard enough to support large loads.

For land cultivation, hydraulic reversible ploughs are frequently employed. It aids in fracturing the soil’s hardpan and turning over crop residue. This tractor attachment complements medium and hard soil and is suitable for crops including sugarcane, grains, oilseeds, pulses, and cotton.

One of the most popular tools for cutting various crops including hay, flax straw, and salt marsh hay into compact bales is the tractor baler. It becomes simple to move, store, and manage. Certain bales are used to preserve and dry intrinsics. One of those improvements, tractor baler automation, is unique to John Deere nine series baler tractors and is certainly a technology that changes the game. The automation of balers makes using baling simpler than before.

An agricultural tool known as a seed drill is used to plant seeds for crops by placing them in the ground and burying them to a certain depth while being pulled by a tractor. This guarantees that seeds will be dispersed uniformly.

In order to ensure that the seeds are covered by soil, the seed drill sows the seeds at the correct depth and velocity. By doing this, they are prevented from being eaten by birds and other animals or from drying up from sun exposure. Seeds are spread out in rows using seed drill machines, which enables plants to receive enough sunlight, nutrients, and water from the soil.

A happy seeder is a tractor-mounted tool used for harvesting crops, planting wheat in bare soil, lifting paddy straws, and other agricultural tasks.

Happy Seeder is the ideal implementation model for increasing use in environmentally friendly mechanisms that not only save time but also fit the soil, making it the ideal residue management system.

It is a device used to examine green air pollution control methods.

The advanced technology known as the tractor blower machine is employed for many tasks. Optimal designs, as well as quality assurance, are included in the special features of tractor implements. Tractor blowers are available in a range of prices for different litre capacities, including 200, 300, and 600 litres. A blower is a tool used in orchard cultivation.

For main tillage tasks, tractors are employed with the Mould Board Plough Implement. It is fully submerged and serves to cut the rubbish. By preventing the crop’s green manure from decomposing beneath the soil, it aids in crop function. When manure or compost is applied to a field, the mouldboard plough is also used to mix and turn items in the soil. A share, share point, landslide, frog, shank, frame, and hitch system are included with this instrument.

A Rake is an agricultural implement machine that is developed for numerous horticulture tasks.

Rake machines are made for gardening tasks including removing grass, gathering grass-derived leaves, aerating the soil, and more.

Rakes are specifically employed in farming, agriculture, cultivation, and arrangement. There are several rakes made specifically for lawn cuttings, party food, and cheap and light stuff.

The disc plough uses primary tillage to work. Even in conditions of trashy and stumpy ground, it is employed to scour issues. A common mainframe, rock shaft assembly, disc beam assemblies, a spring furrow wheel, and a gauge wheel are a few of the distinctive features. Its versions include several that may function as 2, 3, and 4 bottoms. Mounted on tapered roller bearings are the discs.

After ploughing and subsoiling, Power Harrow works to aerate the soil that is frequently used for secondary tillage. The compacted ground may also be broken by it. It is employed to prepare the ground. The Power harrow is offered in a variety of models with varying amounts of brand recognition.

A loader is a piece of heavy equipment used in construction to move or load materials such as dirt, gravel, sand, and demolition waste into or onto other pieces of equipment (such as a tipper lorry, conveyor belt, feed-hopper, or railroad car). A loader is a type of tractor, typically on wheels but occasionally on tracks, that has two booms (arms) that are connected at the top to a front-mounted wide bucket that is used to lift loose material from the bottom, such as dirt, sand, or gravel, and move it from one location to another without pushing the fabric across the ground.

To get the latest updates on the tractor, tractor price, and tractor news install the KhetiGaadi application.

Why Farmers Are Protesting Against Farm Bills