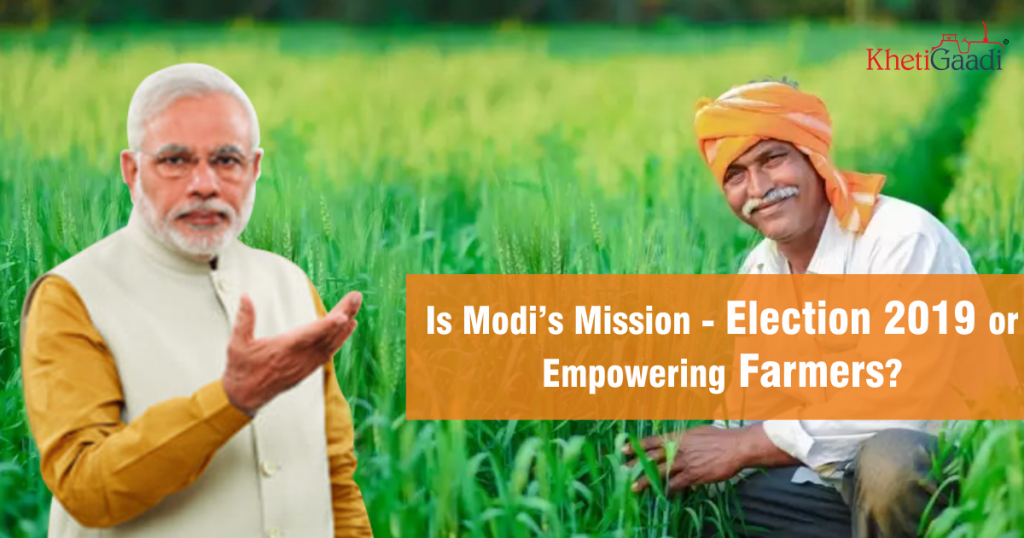 Farmer Tractor : This summer along with the sun, election fever is also raising its temperature, will it be Rahul Gandhi or Modi again? Kuch Bhi Ho Sakta Hain, we never know. It is seen that every party is investing a lot of efforts in party promotion. Any Government that comes to power, should intend to push our country at a greater height. Keeping this objective in mind, let’s have a look at what the Modi Government has done and what it will do in future as BJP is on fire right now!

Our current government led by Prime Minister Shri. Narendra Modi has taken a lot of strategic yet effective steps to accelerate the country’s growth. Their prime focus is on Farmers as our nation is recognised as agriculture nation due to the involvement of more than 70% of the total population in agriculture. Modi Government’s motto is to ‘Empower the Farmers’ and to make it true, a lot of schemes came in the picture as Modi Government schemes for farmers and farmer Tractor. From doubling farmers income to securing them, teaching technology to farmers, building farm related infrastructure and boosting the research on agriculture and education these are some of the major goals of BJP and ultimately Modi Government for upcoming years.

For any scheme or campaign to work all it takes is, to create awareness about the same in people and thereby society. Modi government has exactly implemented the same strategy, they create some of the very unique and easy to understand awareness campaigns such as ‘Sabka Saath, Sabka Vikas’, ‘ Per Drop More Crop’, ‘Har Khet Ko Pani’ for the society and especially for farmers. After losing 3 very important states to arch enemy Congress party, BJP-NDA has started promoting the party very aggressively since Feb 2019. The benefits received by farmers in this fiscal year are and will be as follows:

PM-KISAN YOJANA – The Central government announced Pradhan Mantri Kisan Samman Nidhi worth Rs. 75000 crore, which will be distributed in the form of Rs. 6000 annually – which will further be divided into three instalments of Rs. 2000 each. One among them is already deposited in farmer’s accounts by March 2019. Until now, the total sum of Rs. 5215 crore has been transferred to 2.6 crore small farmers within just a span of 37 days from the announcement of the scheme.

Soft Loan to Sugar Industries- After raising the selling price of sugar at factory gate by Rs. 2 to Rs.31 per Kg, the NDA government has taken an overnight decision to calm the reaction by providing soft loans to farmers in the month of March 2019. As per the announcement the government has approved a total sum of Rs. 10540 crore to the sugar industry to pay their mounting debts as soon as possible. The amount approved in this loan will be to the extent of about Rs. 7900 to 10,540 crore and the centre will bear the interest subvention cost at the rate of 7 to 10%.

Crop Loans at 0% interest – Under the leadership of Modi, the central government has also announced to provide crop loans to the farmers at a 0% interest rate. The loan amount should be up to Rs. 1 lakh.

Indeed Modi government has done some out of the box thinking whether it’s about releasing the schemes or promotion of the party. Well, the fortune of the party will definitely depend on how quickly all these schemes are implemented and to what extent. As we all know, proof of every pudding is in eating.

Untouched Science in the Agricultural Sector in India

Know in Detail About Myths and Facts of Indian Agriculture