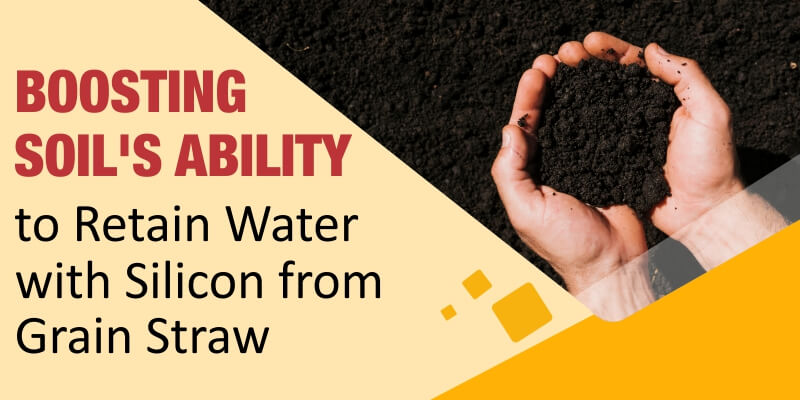 As growing seasons get drier as a result of climate change, water storage capacity is becoming more and more significant. Grasses and cereals take up a lot of silicon from the soil. Amorphous silica, a kind of silicon dioxide, is how this silicon is kept in storage.

Particular silicon found in grain straw improves the soil’s ability to retain water. In field tests on sandy soils that are prone to dryness, scientists observed this impact of silicon. They contend that it is advantageous to include straw residues following grain harvest since, in the absence of doing so, the soil’s amorphous silica content and soil moisture content will both decline.

They claim that as growing seasons become drier due to climate change, water retention capacity is becoming more and more significant. Grasses and cereals take up a lot of silicon from the soil. Amorphous silica, a kind of silicon dioxide, is how this silicon is kept in storage.

Crop susceptibility to diseases, pests, and other stressors is increased by amorphous silica. The following crop gains from this silica’s return to the soil through straw leftovers. The soil’s ability to retain water is enhanced by the amorphous silica found in straw leftovers. As a result, crops have more water at their roots, which makes it simpler for them to get through dry spells.

Researchers in eastern Germany conducted tests on sandy soils that are prone to dryness when they identified this characteristic of amorphous silica. Incorporating straw leftovers after grain harvest is a smart approach to increase the soil’s ability to store water, according to researchers who published their findings in the popular scientific journal Plant nutrition messenger. In addition, they found that spring wheat evaporates water less slowly on amorphous silica-rich soils. The most recent research results from this investigation into amorphous silica’s function in soil were released in the online publication Plant nutrition courier.

Amorphous silica differs from silicon in sand and clay mineral composition. This silicon does not weather well and cannot be absorbed by plants. Farmers who harvest straw reduce the amount of amorphous silica in the soil. However, this loss of amorphous silica is covered up by routine soil liming. The biodegradation of organic matter, including siliceous agricultural wastes, is accelerated by raising the pH of the soil.

The released silica is absorbed by crops, and it eventually leaves the field. The amount of amorphous silica in the soil is consequently dropping. German researchers in the Plant nutrition courier claim that over time, this will lessen the soil’s ability to retain water. Because of the drier agricultural seasons brought on by climate change, they prioritize water storage capacity.

Researchers from the universities of Bayreuth and Potsdam, as well as the Leibnitz Centre for Agricultural Landscape Research, studied silica. In addition to grain straw, they have investigated synthetic amorphous silica as a soil additive. This substance works similarly to amorphous silica made from straw, however, it is far more expensive.

Both a clean waste stream with enough amorphous silica and an economical industrial substitute are still undiscovered by researchers. Thus, the cheapest source of this moisture-retaining silica is cereal straw.