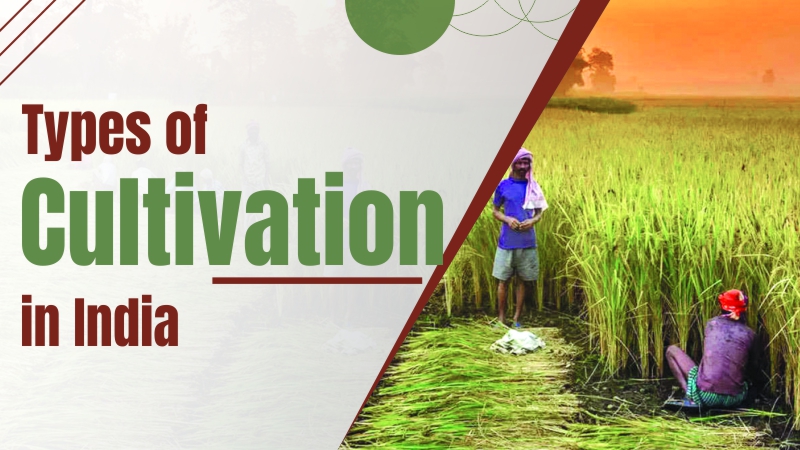 The enormously rich Indo-Gangetic plain, one of the world’s largest plain areas, is located in India. India offers a wide range of climates and soil types. These physical variations have played a significant role in the development of various cultivation techniques in the Indian agricultural sector, along with elements like the availability of irrigation, the use of machinery, and modern agricultural inputs like High Yielding Varieties of seeds, insecticides, and pesticides.

The forms of farming used in various regions of India vary; some are based on horticulture, ley farming, agroforestry, and many other practices. India’s geographic location causes certain of its regions to experience various climates, which in turn affects how productively each region’s agriculture is. India’s monsoon cycle is crucial to achieving high crop yields. India’s agricultural history is broad and dates back at least 9,000 years.

Impact of climate on Cultivation systems in India:

Each location in India has unique soil and a climate that are only suitable for particular farming techniques. The farming techniques are constrained to cultivate crops that can resist drought conditions, and farmers are typically only allowed to plant one crop in many places of western India. This climate is present in Gujarat, Rajasthan, Punjab, and northern Maharashtra, where jawar, bajra, and peas are grown as appropriate crops. In contrast, the eastern part of India receives 100–200 cm of rain yearly on average without irrigation, allowing these areas to produce two times as much food. This climate is common on the West Coast, West Bengal, parts of Bihar, the U.P., and Assam, where crops including jute, sugarcane, and rice are grown.

Farmers in India practice a variety of cultivating methods based mostly on the qualities of the soil, the climate, and the availability of irrigation systems:

Small and dispersed landholdings and basic, traditional cultivation methods are used in this style of farming. Modern machinery like tractors and agricultural inputs like chemical fertilizers, insecticides, and herbicides are completely absent. Farmers mostly grow grains in this farming, along with oilseeds, legumes, vegetables, and sugarcane.

Cultivation for subsistence is further divided into:

Primitive Cultivation: Digging implements and communal or family labor are used in the practice of primitive subsistence agriculture on small plots of land. Along with soil fertility and other environmental factors, this style of farming is dependent on the monsoon. These forms include nomadic herding and changing agriculture, for instance.

Intensive Cultivation: Using basic tools and additional labor, intensive subsistence agriculture is carried out on tiny plots of land. There is sufficient supply for both local consumption and outside sales. On the same plot, multiple crops can be grown each year because of the sunny climate and fertile soil for most of the year. Typically, rice, wheat, maize, pulses, and oilseeds are grown.

Since the majority of the output is sold on the market to make money, it is the exact opposite of subsistence farming. Farmers employ inputs like irrigation, synthetic fertilizers, insecticides, herbicides, high-yielding varieties of seeds, etc. in this method. Cotton, jute, sugarcane, groundnuts, and other important commercial crops are grown throughout India.

Since the majority of the population in this region consumes wheat, rice production in Haryana is primarily done for business reasons. However, rice cultivation would primarily be of the subsistence variety in the East and North-Eastern states of India.

Spices, rubber, bananas, rubber, tea, and coffee are a few examples of plantation crops. In the nineteenth century, the British introduced the majority of these crops to India.

Mixed farming is the practice of cultivating both crops and animals at the same time. Farmers who practice mixed farming also benefit economically.

All of the classifications are dependent on the nature and goal of farming; hence, there may be times when they overlap. Banana cultivation, for instance, can be categorized as both commercial farming and plantation farming.

The amount of yield per unit of land is the primary distinction between these two agricultural methods. India does not engage in extensive agriculture compared to the temperate regions of the United States and Canada.

Extensive farming is the practice of cultivating a sizable area of land. Due to the wider area, there, total production may be high, but production per unit area is low.

For understanding more about the types of cultivation in India, you can go through the KhetiGuru Application. KhetiGuru provides you with all the detailed information regarding agricultural methods and other agricultural activities. For tractor, tractor price, and tractor news updates install the KhetiGaadi application.

Are Agricultural Subsidy and Cash Transfers Enough for Farmers?

Impact on Indian Agricultural Sector During Amid Coronavirus