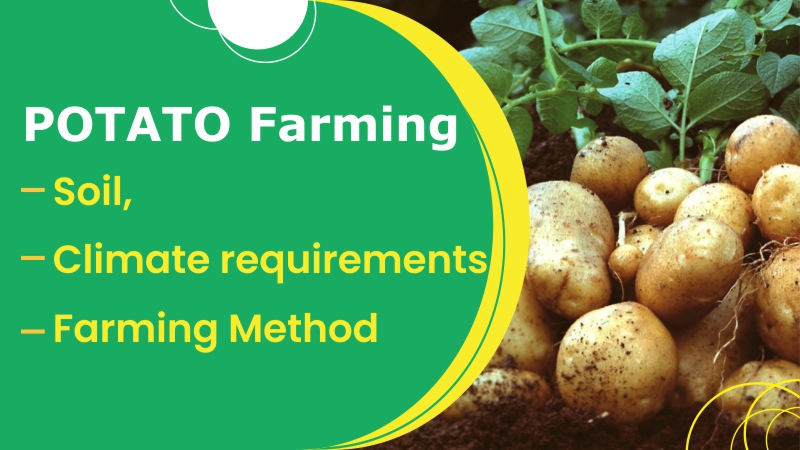 On the Indian meal table, potatoes are a mainstay. Most households prepare their food with potatoes. They are as predictable as rice or wheat. So, growing potatoes is a good, successful business. The edible portion of the potato plant, known as the tuber, is what is meant by the word “potato.” The term “potato” can also refer to the entire plant. It is a vital staple meal throughout the majority of the world because of its high carbohydrate content. More potato farming can be done annually than all other vegetables combined. Since there is such a huge demand for potatoes, growers see it as a lucrative industry. It also makes a nice transition point from grass to the next crop in the rotation.

The most significant food crop in the world is the potato. In India, the potato is a temperate crop that is produced in a subtropical climate. A crop that has traditionally been “the poor man’s friend” is the potato. Over 300 years have passed since the cultivation of potatoes began in our nation. It has become one of the most widely grown crops in this nation for vegetables. Potatoes are a cheap food that gives the human diet a source of cheap energy. Starch, vitamins, particularly C and B1, and minerals are all abundant in potatoes. They are 20.6% carbohydrate-rich, 2.1% protein-rich, 3.3% fat-rich, and 1.1% crude fiber-rich.

Loamy soil, sandy loam, silt loam, clay soil, and other types of soil can all be used to grow potatoes. To reduce resistance to tuber enlargement, the soil should be loose. Fertile and well-drained soil are prerequisites. Acidic soil with a pH range of 4.8 to 5.4 is needed for potato growing. The potato is within the category of the cool-weather crop.

Since potatoes are a cool-season crop, locations with a cool climate, fertile soil, and adequate moisture are ideal for growing them. Temperature, light, soil type, moisture level, and nutrients all have a significant impact on the growth of potatoes. When the temperature rises above 30°C, tubers stop growing. This is due to the fact that respiratory speed rises with rising body temperature. Photosynthesis-produced carbohydrates are used up during the process rather than being retained in the tubers. Thus, at higher temperatures, tuber development is impacted. The optimal soil temperature for the development of potato tubers is 17–19°C. The ideal conditions for potato growth are chilly nights and bright sunshine during the day.

The procedure of Potato Farming:

The ground is sun-exposed and dug up to a depth of 24 to 25 cm. The soil should have a larger pore space and present the least obstruction to the growth of tubers. During the final ploughing, well-decomposed FYM (25–30 t/ha) is combined with the soil.

Before planting, furrows are opened 50–60 cm apart. On the centre of the ridge, at a depth of 5-7 cm, the whole or cut tubers are planted, spaced 15–20 cm apart, and covered with dirt. The potato seed rate is influenced by the planting season, duration, seed size, spacing, etc. For round types, the seed rate is 1.5–1.8 t/ha, while for oval kinds, it is 2.0–2.5 t/ha. The invented a four-row mechanical potato planter that can do everything from ridging to planting and cover an area of 4-5 hectares per day. The operation just needs a few people, yet the tuber damage is as little as 1%.

The high nutrient needs of the potato crop make the application of fertilisers and organic manures crucial for achieving profitable and high yields. Green manuring is useful on light soils and in areas where organic manures are difficult to come by. The ideal amount of fertiliser to apply depends on a range of factors, including soil type, soil fertility, climate, crop rotation, crop variety, growing season length, and moisture availability.

Due to the plant’s shallow and disorganised root structure, irrigation is particularly important in the cultivation of potatoes. Following planting, the first irrigation should be brief (5-7 days), light, and spaced 7–15 days apart, depending on the soil type and climate. The most cost-effective irrigation method, which offers the maximum production and about 50% water savings, is the drip system. It also makes it possible to apply fertilisers using irrigation water. The sprinkler system distributes water uniformly and minimises runoff and percolation water losses.

In the potato industry, the harvest season is crucial. Till the vines die, tuber formation continues. Depending on the area, soil type, and variety seeded, the primary crop is ready for harvest between 75 and 120 days after planting. The crop should typically be gathered in the hills when the soil is not overly damp. The keeping quality of tubers harvested during the monsoon is poor, and they might also develop several kinds of rots. When the majority of the leaves have turned yellow-brown, the primary crop is prepared for harvest. The tops are being chopped close to the ground. After 8–10 days, the potatoes are removed from the field by ploughing.

Are Agricultural Subsidy and Cash Transfers Enough for Farmers?

Untouched Science in the Agricultural Sector in India