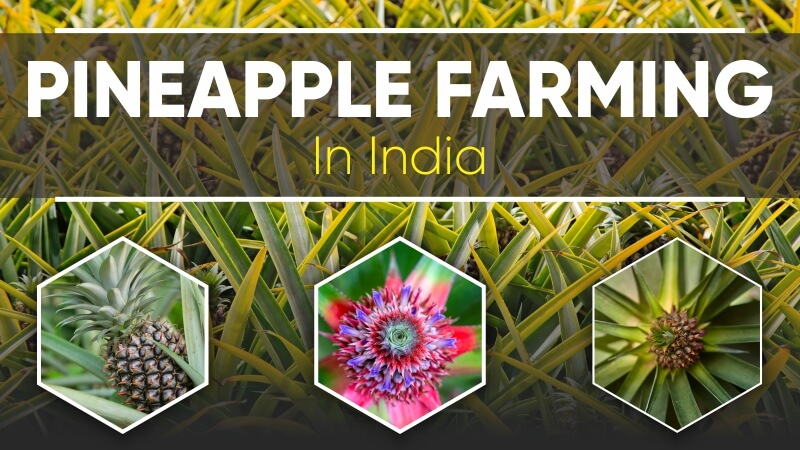 The most important plant in terms of economic impact is the pineapple, a tropical plant with a palatable fruit. The pineapple is a native of South America and has been grown there for many years. The pineapple became a prominent cultural symbol of luxury after it was introduced to Europe in the 17th century. Pineapple has been grown for commercial purposes on numerous tropical plantations and in greenhouses since the 1820s.

Pineapples develop into tiny shrubs; the unpollinated plant’s individual blossoms combine to generate a number of fruits. The plant typically matures in a year and is propagated from an offset generated at the top of the fruit or from a side branch.

Pineapples are reproduced from the top, sucker, and slip, unlike other crops. Crowns, slips, and suckers are the planting materials employed in the cultivation of pineapples. While slips and suckers only produce blooms 12 months after planting, crowns do so 19 to 20 months later. The plants that will be used for cultivation need to be at least 5 to 6 months old. Since crowns take longer to flower, slips and suckers are typically used for commercial applications. Materials must be of a consistent size. In previously dug and prepared trenches, the suckers and slips are planted.

Pineapple is a tropical fruit that is both delicious and healthful. It is frequently consumed freshly cut, grilled, or baked.

Improvements in digestion, immunity and post-operative recuperation are just a few of the health advantages of pineapple and its constituents.

How to start pineapple farming:

The roots of pineapples are short. They, therefore, tend to remain. Plants that attach during the fruit-development process will produce uneven fruit and unbalanced growth. Plants that are earthed benefit from a strong anchor. The soil is pushed down from the ridges into the trench in this method.

From an economic standpoint, weeding is crucial for every type of cultivation. The two weeds that grow in pineapple the most frequently are hariyali and nutgrass. Chemical weeding is advised because hand weeding is a time-consuming and difficult process. Typically, diuron and bromacil should be used together as a pre-emergence spray.

This is a crucial stage if a pineapple is being cultivated as a rain-fed crop. Mulching is primarily used to prevent weed growth and save moisture. Mulching is most easily accomplished and least labor-intensively by using a black polythene film. A more natural method of mulching is to use leaves and straws and sprinkle them among the pineapple plants in the soil.

Prior to beginning pineapple farming, choosing a suitable piece of land is essential. Land preparation includes tasks including primary and secondary tillage, land reclamation, leveling, and creating ridges and furrows.

It is preferable to select plain ground over muddy land. The land should be situated in a way that pineapples receive direct sunlight all day long. In pineapple, sunlight makes fruit ripen more quickly. Pineapple growing is also possible in partial shade.

The optimal climate for cultivation is a mild tropical temperature like that on damp hill slopes. This can also be produced as an intercropping system on plains that receive shade. The best elevation for farming is between 500 and 700 meters. A light, well-drained soil with a pH range of 5.5 to 7.0 is ideal. If drainage facilities are present, heavy soils can also be utilized for commercial farming.

The best time to plant is from July through September.

Use a sharp tool to cut the pineapple from the plant where it connects to the tail in order to harvest it. After that, you may either let the fruit continue to age at room temperature if necessary or, if it’s ready, refrigerate it. Crowned pineapple can be safely stored for up to 15 days after harvest. However, in order to slow down the ageing mechanism, those being transported should be chilled while in transit. For 20 days, pineapple can be kept at 10-13°C. Additionally, the recommended storage temperature is 7.2°C with a humidity level of 80-90 percent.

To Know more about pineapple farming and other crops, install the KhetiGuru application that provides you with all agricultural information and also gives you expert advice for farming-related problems. To get the tractor, tractor price related information visit the KhetiGaadi website.

Garden Tools and Their Importance