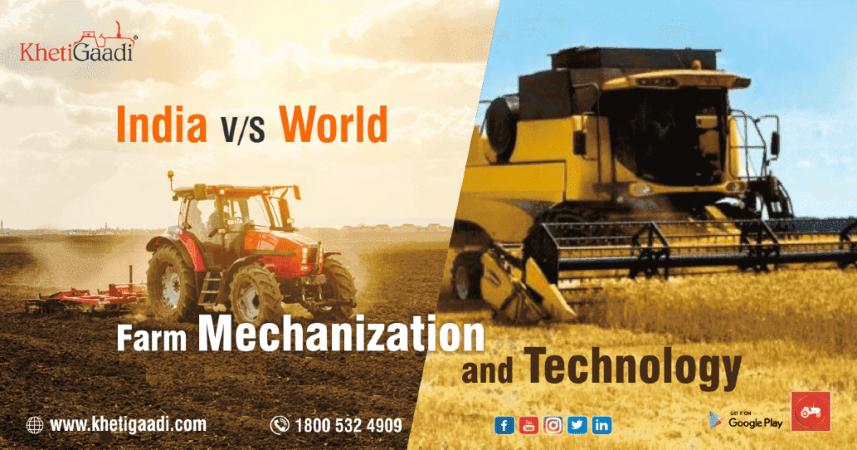 As compared to countries like the USA, Canada, Brazil, France, Germany, Italy, Australia, Russia, South Korea, Japan, and China, however, we still have a considerable way to go in achieving food security through farm mechanization.

According to a report by the Indian Council of Food and Agriculture (http://icfa.org.in/assets/doc/reports/RTC_Farm_Mechanization.pdf), only 40% to 45% of Indian agriculture has been mechanized.

It should be noted, however, that these mechanization percentages can vary according to different crops. Farming for some crops – such as rice, for instance –is highly mechanized while farming for other crops – such as cotton – may be comparatively less mechanized.

There can also be a difference in mechanization percentages for crop planting and crop harvesting activities.

Even so, the high agricultural production in these countries clearly demonstrates the undeniable link between the use of mechanized farm implements and a higher crop output.

If India is to keep up in the global food production stakes and meet the demands of her own growing population, a deeper technological penetration is essential. This can be boosted with favourable government incentives, environmentally sustainable policies, and an increased production of farm machinery by Indian farm equipment manufacturers.

To explore a variety of farm machinery and equipment currently available in India, along with their details and specifications, please visit khetigaadi.com.

Besides the obvious differences in climate, crop species, and land sizes, there is a huge disparity between the use of farm machinery in countries like the USA, Canada, Germany, France, Italy, Russia, South Korea, Japan, China, and Australia, and the rest of the world.

In many Asian and African countries – and this includes India, despite our current progress – much of the farm labour is still manual and supplied by men, women, children, and drudge animals. This affects the overall productivity and efficiency and it is one of the main reasons why the Indian agricultural sector lags behind in terms of agricultural output.

There is no question that using different types of farm machinery like tractors, harrows, tillers, rotavators, combines, seed drills, threshers, cultivators, sprayers, and irrigation pumps would cut down on time and effort, and divert the labour of farm workers to other necessary but less strenuous farm chores.

It would also resolve the growing problem of the labour shortage in rural areas. While 56.6 (http://censusindia.gov.in/Census_And_You/economic_activity.aspx) of the Indian population is engaged in agricultural activities  – as opposed to 2.5% of the population in the USA, 1.3% in the UK, 1.4% in Germany, 2.8% in France, 1.2% in the Netherlands, 4% in Italy,  3.6% in Australia, 5.3% in Argentina, 9.4% in Brazil, 9.4% in Russia,  27.7% in China, 2.9% in Japan, 11% in Malaysia, 32% in Indonesia, and 42.7% in Bangladesh – rapid urban development, growth of other industrial sectors, and government schemes such as the Mahatma Gandhi Rural Employment Guaranteed Annual Work Scheme have opened up more lucrative job opportunities for the rural youth and has led to a steady migration from rural areas to urban areas.

There has been a hike in farm wages in order to retain labour, but the seasonal nature of agricultural work, as well as the drudgery involved and a perception of the work as low status, are additional reasons that make people opt for other available employment paths. The rural to urban migration has also been affected by an increased use of factory-produced tools in place of artisan made tools.

According to the Indian Journal of Agricultural Economics, migration from rural areas to urban areas has been occurring at the rate of 3.15 percent per year and it is expected that by 2020, 35 percent of India’s population will be living in urban areas.

The Indian Economic Survey of 2017-2018 estimates that agricultural labour will reduce by 25.7 percent by 2050. This will adversely affect labour-intensive crops such as wheat, rice, sugarcane, groundnuts, and cotton.

With agricultural mechanization, only a few farm workers would be needed to accomplish a larger amount of work. It would improve farming efficiency, cut down on the harvest and post-harvest losses, and produce a higher and better quality of crop yield.

Farm Mechanization in India and Other Countries

Farm mechanization in India must be adapted and adjusted to suit specific regional conditions and requirements and must be connected to the broader agricultural policies and the social and cultural framework of the Indian farming community.

Applying such strategies to farming in Bangladesh and Indonesia has already demonstrated positive results. According to Bangladesh’s Farm Machinery and Postharvest Process Engineering Division, farm mechanization made it possible for the country to raise the annual agricultural output from 11 million tons (1971) to 30 million tons (2007).

Using agricultural technology, Indonesia is pushing towards self-sufficiency in rice production. The Indonesian government announced a national rice production of 79 million tons in 2016, and more widespread agricultural mechanization will allow them to put 200,000 hectares of additional farmland under rice cultivation.

This makes the use of large farm machinery impractical and even impossible in some cases. A majority of these small farmers are from economically impoverished backgrounds and cannot afford the very high purchase and maintenance prices of the farm machinery.

While the Indian government does offer 25 percent to 50 percent subsidies for buying the machinery under the Sub-mission on Agricultural Mechanization (SMAM) scheme of the National Mission on Agricultural Extension and Technology (NMAET) plan, many of the marginal farmers would still need to take out loans for the purchase,  and many of them are likely to be found ineligible for the loans since they are unable to furnish the collateral that most financial institutions require to undertake the loan risk.

A possible solution to this would be the use of smaller and comparatively less expensive farm machinery such as power tillers. Farmers can form co-operatives to buy or hire the farm implements and machinery and they can share these as needed for tilling, harvesting, and post-harvest operations.

Under the SMAM scheme, the Indian government is establishing custom hiring centres in rural areas and offering incentives to Indian entrepreneurs to do the same. R&D centres and Indian agricultural equipment manufacturers are also being encouraged to come up with more innovative farm technologies to suit Indian conditions.

To some extent, European countries like Germany, France, and Italy face similar issues as India does when it comes to shrinking farm sizes as well reduction in the overall number of farms. In 1900, European farmers formed 50% of the population and by 1950, their numbers had fallen to 30%. Rapid urbanization is one of the reasons for this.

Younger people prefer the lures of the cities and ageing farmers, with no one to take over after them, may sell off their agricultural land, either to another farmer, to an agricultural company, or to a non-agricultural entity.

The situation in the USA, Canada, Russia, and Australia is not very much different. The Canadian and the Russian governments are offering various incentives for their citizens to take up farming; in Russia, this includes free land for farming.

They’ve also opened their doors to agricultural immigrants. Australia, in recent times, has become a popular destination with Indian farmers, particularly from Punjab; they sell their few acres of land in Punjab for 4 or 5 crores and use part of that money to buy several thousand acres of agricultural land in Australia.

Immigration is not entirely a solution though, as working farmers continue to grapple with an increasing lack of skilled and experienced workers.

Most European farms are highly mechanized, thanks in part to the financial support and subsidies from the EU’s Common Agricultural Policy, and agricultural machinery manufacturers often cite the introduction of SMART farm machinery as a viable solution for the problem of farm labour shortage.

However, in the long run, the reduction in the farm numbers translates to a reduced customer base for farm machinery, SMART or otherwise.

In 2005, the EU amended its agricultural machinery industry policy to class tractors as automobiles and applied regulations that fail to take into account the farm machinery sector’s specific technical standards and market demands. These regulations may also be partly responsible for the overall reduction in tractor sales in Europe.

The agricultural market remained down in 2016 in the UK, the Netherlands, and Belgium, while Spain, Austria, and Denmark showed surprisingly chipper results. The European agricultural market appeared to stabilize in 2017 and some analysts predict an upward swing in 2018, although CEMA economic experts continue to advise caution.

For the agricultural machinery industry, this spells a need for higher investment in marketing and distribution to reach the shrinking customer base. There will also be an increased competition between the various tractor brands such as John Deere, AGCO, ARGO, Kubota, CLASS, and CNHi for their share of the limited market.

Indian agriculture is dependent to a great extent on the Monsoon rains. A more widespread use of irrigation technologies like drip irrigation system and rainwater harvesting could lessen this dependence.

It should be noted that these aren’t exactly ‘new’ technologies for Indian farmers. They are only modern versions of the bamboo pipe, stone channels and tanks, and other irrigation systems that have been traditionally used in Indian agriculture.

India, it should be remembered, has a very long history of agriculture and it was only inevitable that Indian farmers came up with techniques to deal with the frequent floods and drought that occurred over the centuries; their survival depended on such innovation.

These water conservation techniques find mention in Vedic literature, in Chanakya’s Arthashastra, and various other Indian historic and literary texts, and are supported by evidence found during archaeological excavations and by existing edifices.

Many traditional step-wells, water reservoirs, tanks, underground water pits, check dams, canals, and embanked channels are still in use and are as efficient now as they were in ancient times.

The Jaintia farmers of Meghalaya and the Adi farmers of Arunachal Pradesh have long used bamboos to build a network of water channels to set up drip irrigation systems to irrigate areca nut, betel vines, black pepper, and other plantation crops.

Since bamboo is available all over India, there is no reason why this practice cannot be adapted and implemented on a wider basis throughout the country.

Bench terrace irrigation is another common practice used to irrigate terrace farmlands in hilly areas. This involves tapping natural streams and channelling the water so that it flows continuously from the upper to the lower terraces. Stone walls are set up to prevent soil erosion and retain run-off water to irrigate the fields.

The Indian government has also been encouraging such traditional practices as they are sustainable and environment-friendly.

Parsley: Not Just for Salad it is The Best Crops For Vertical Farming

One of the important farming tool: Broad fork

Guidelines To Strong and Safe use of Tractors on farms